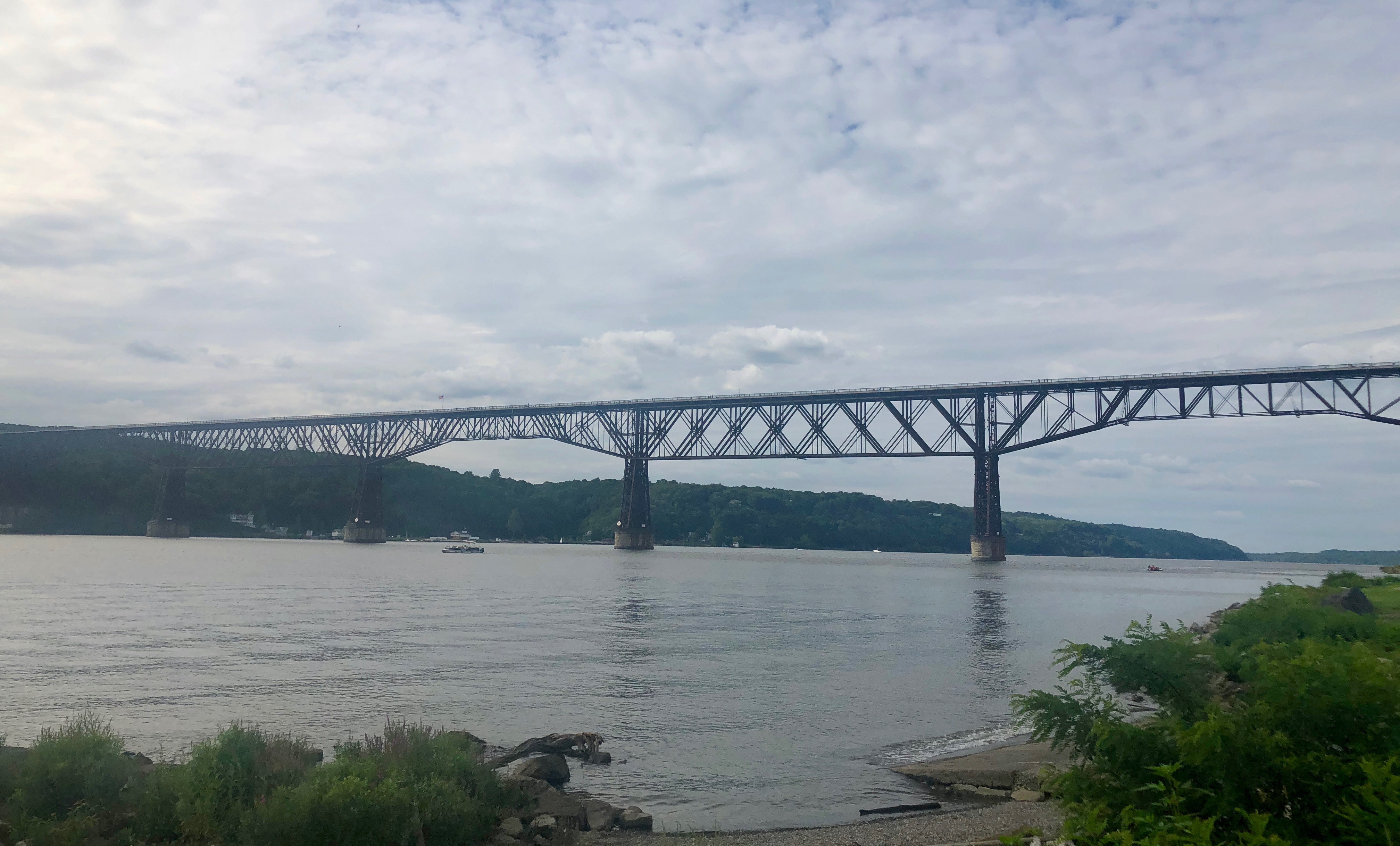 The original plan for the weekend was Jersey Shore but the weather was not cooperating. Over Central Jersey, the radar loop was showing solid green band with occasional yellow-red spots. Since the skies up north looked better, we decided to cross another trip off our list — Walkway over the Hudson in Poughkeepsie. This walkway is a bridge that was built as a two-way railroad. After fire damaged it, the bridge was turned into a pedestrian walkway. 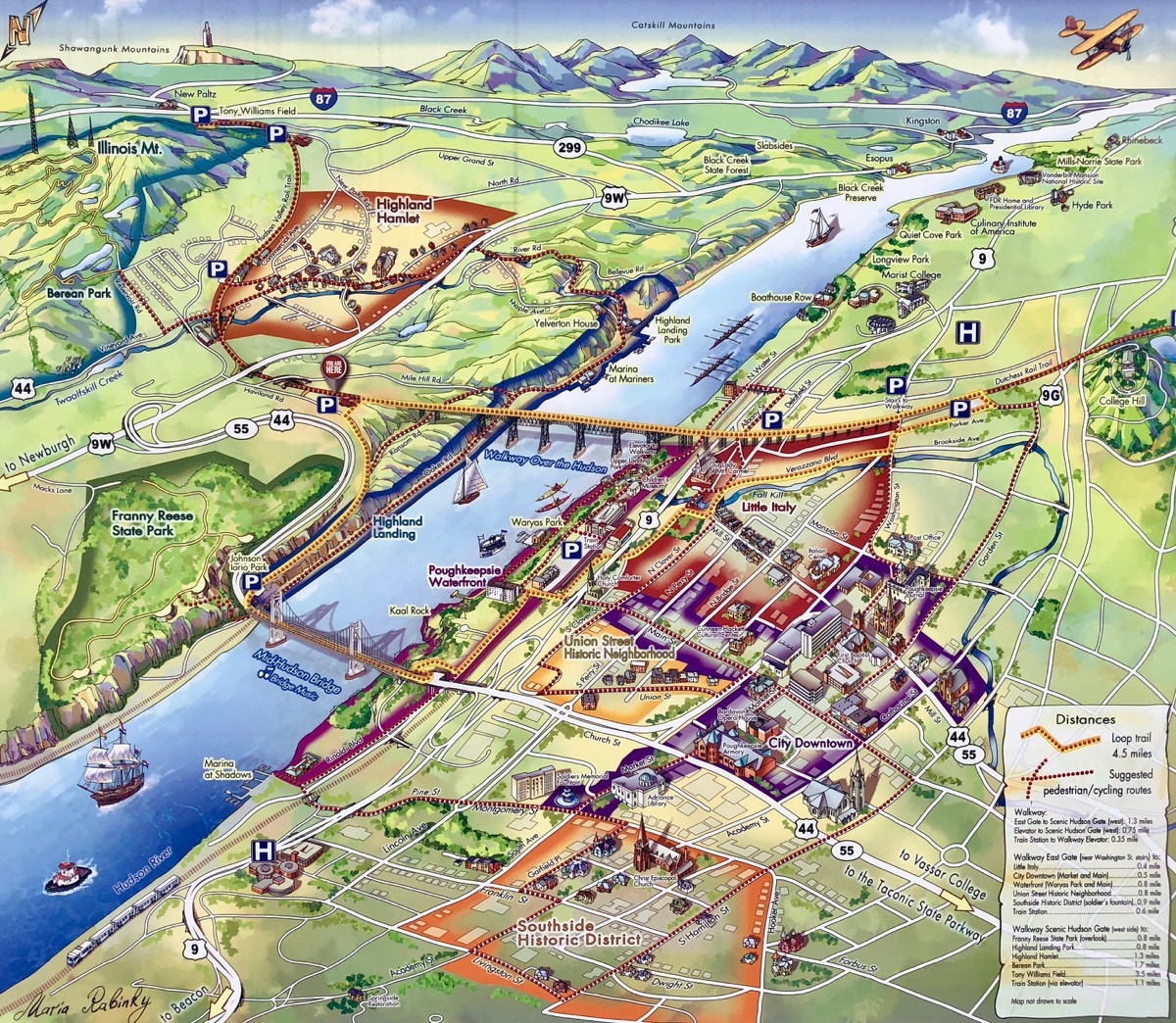 This colorful map by the entrance to the Walkway Loop Trail looked promising but the bridge itself turned out to be lacking character one would expect from what they call a historic neighborhood. It is nothing like High Line in the city where they preserved the rails, planted tall grass, brought in all kinds of benches and lounges. This bridge is paved with plain concrete blocks, railings are plain, plain benches are all over. It feels there like walking to the US Open at the Mets-Willets Point once you get off 7 train in Queens. On a positive side, the bikers here are not nearly as vicious as those going over the George Washington Bridge. 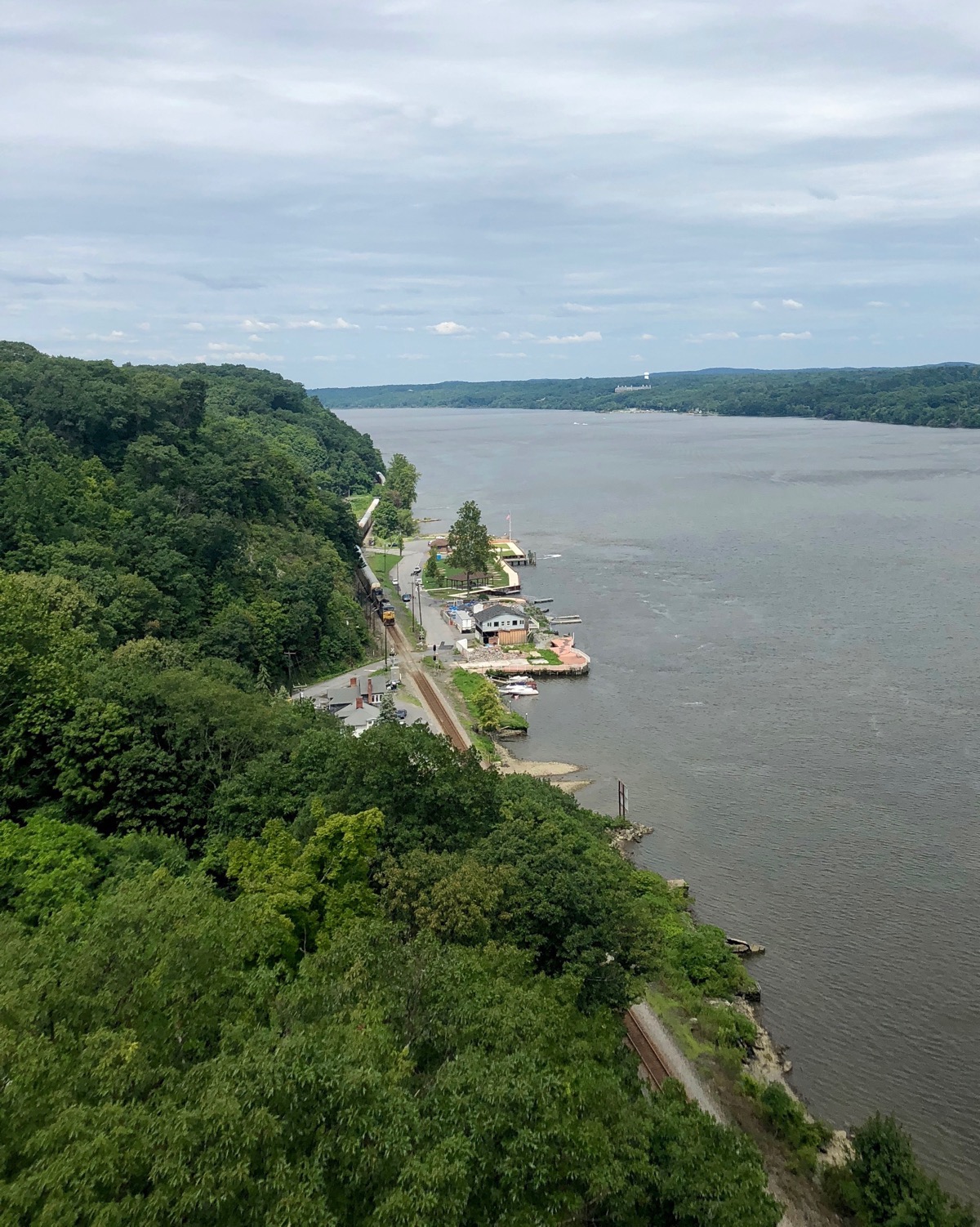 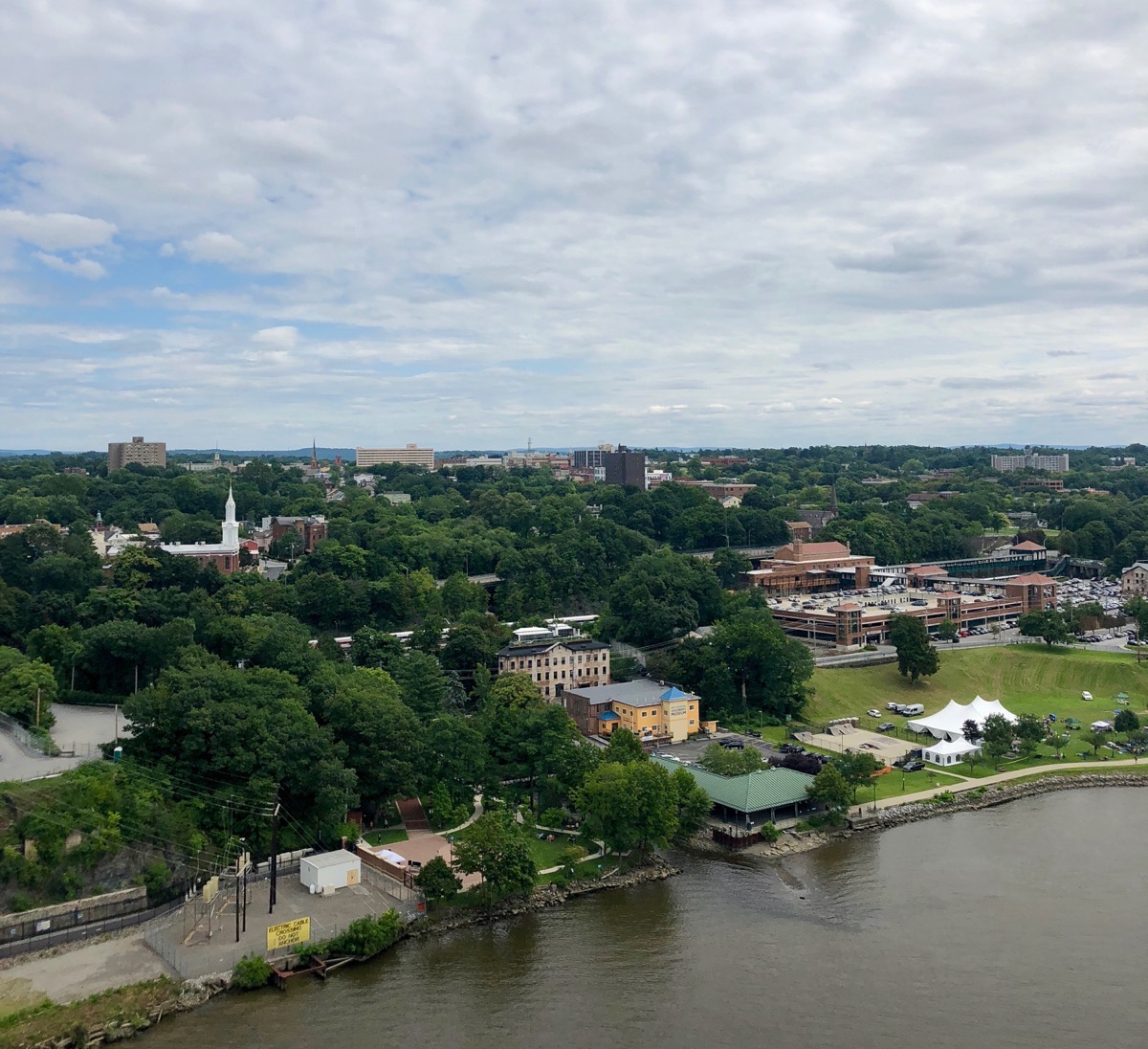 The blah of the bridge is compensated in full by the breathtaking views in each and every direction. The day we were there, the sky was spectacular and added to the mood of a grandeur. 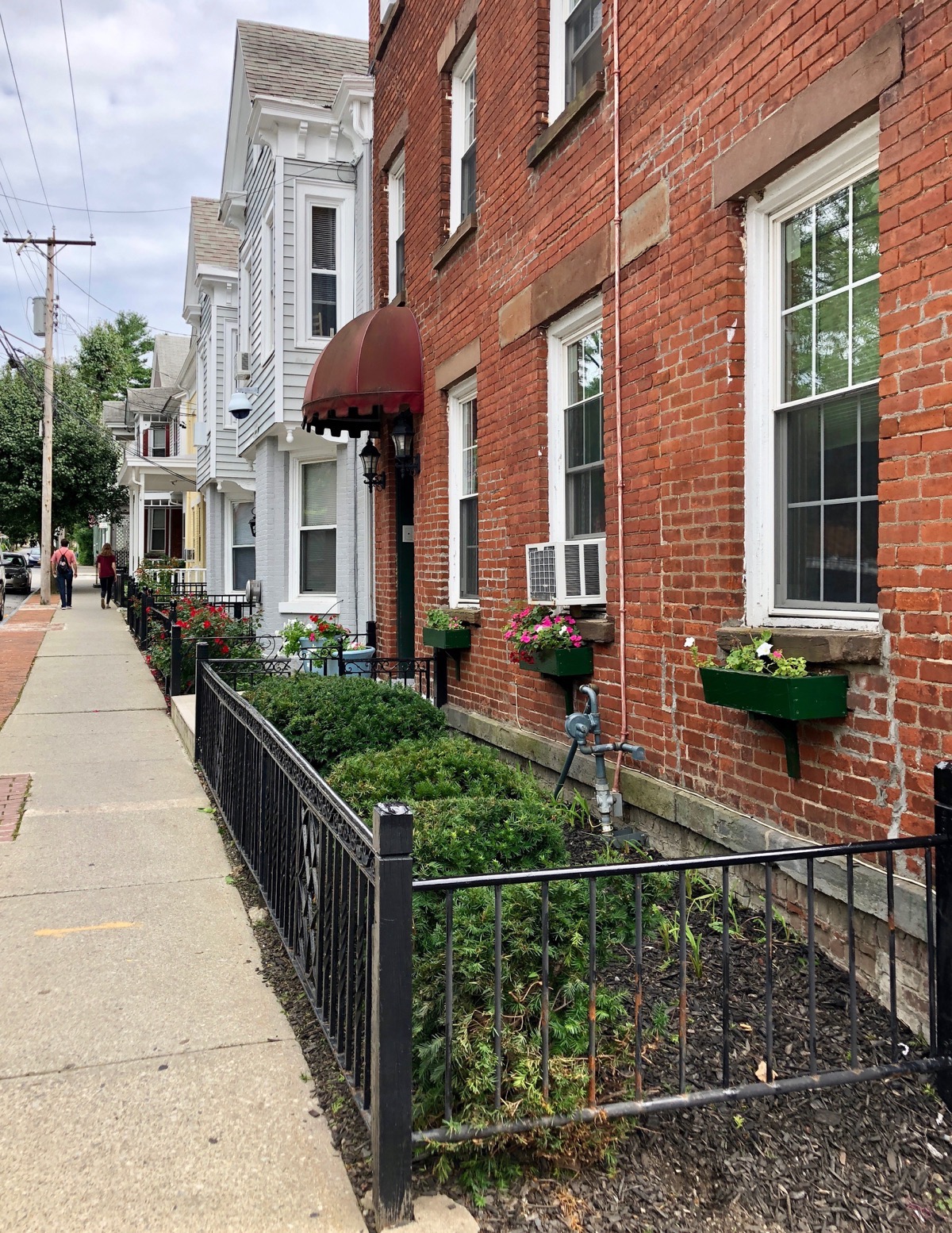 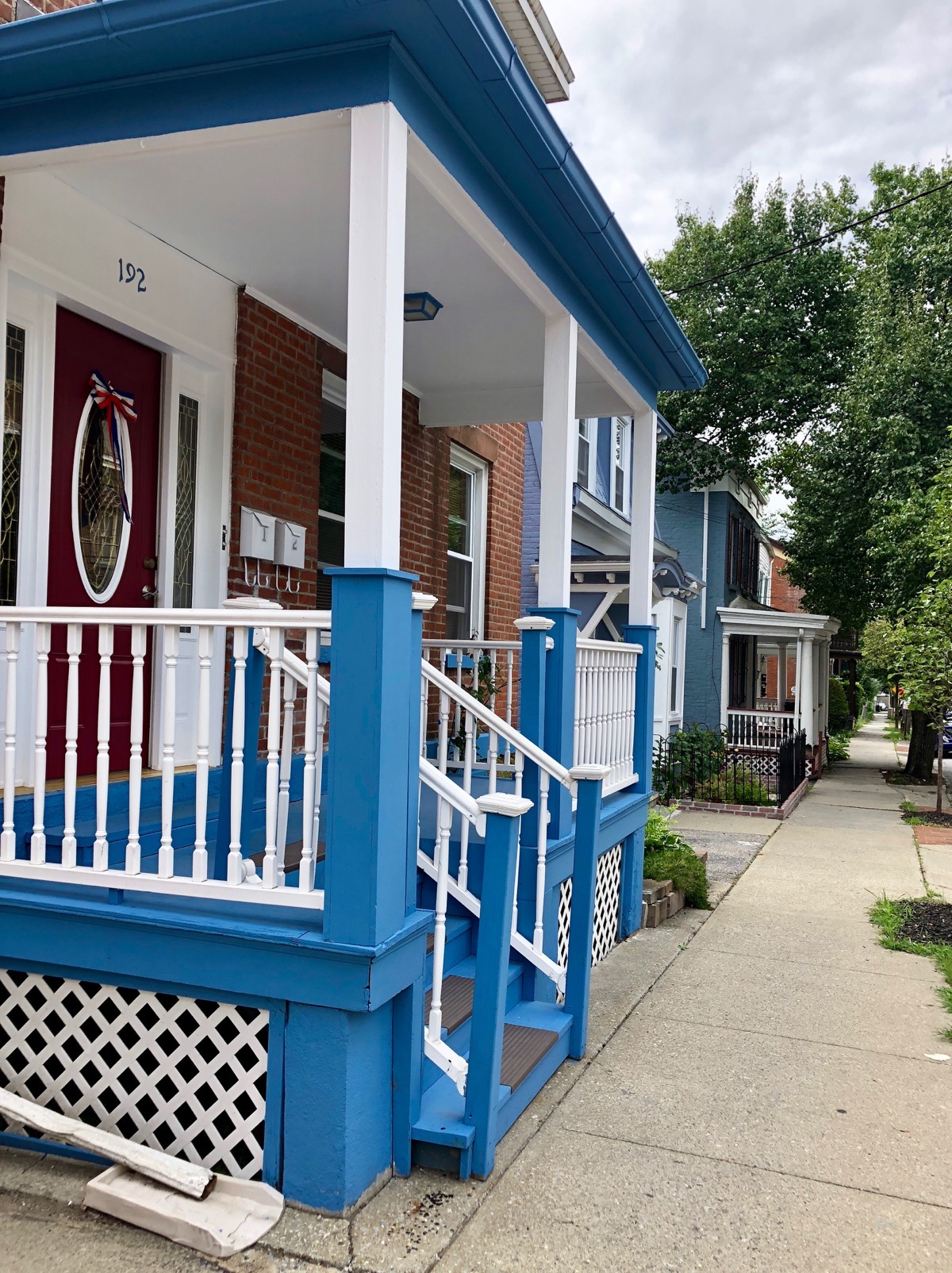 The inviting map promised a historic Poughkeepsie. We walked through its Little Italy, City Downtown, Union Street Historic Neighborhood, Waterfront. There were interesting buildings — some of them well kept. But those were few and far between. For the most part, the town felt deserted and abandoned: overgrown trees, occasional people, occasional cars, closed restaurants. 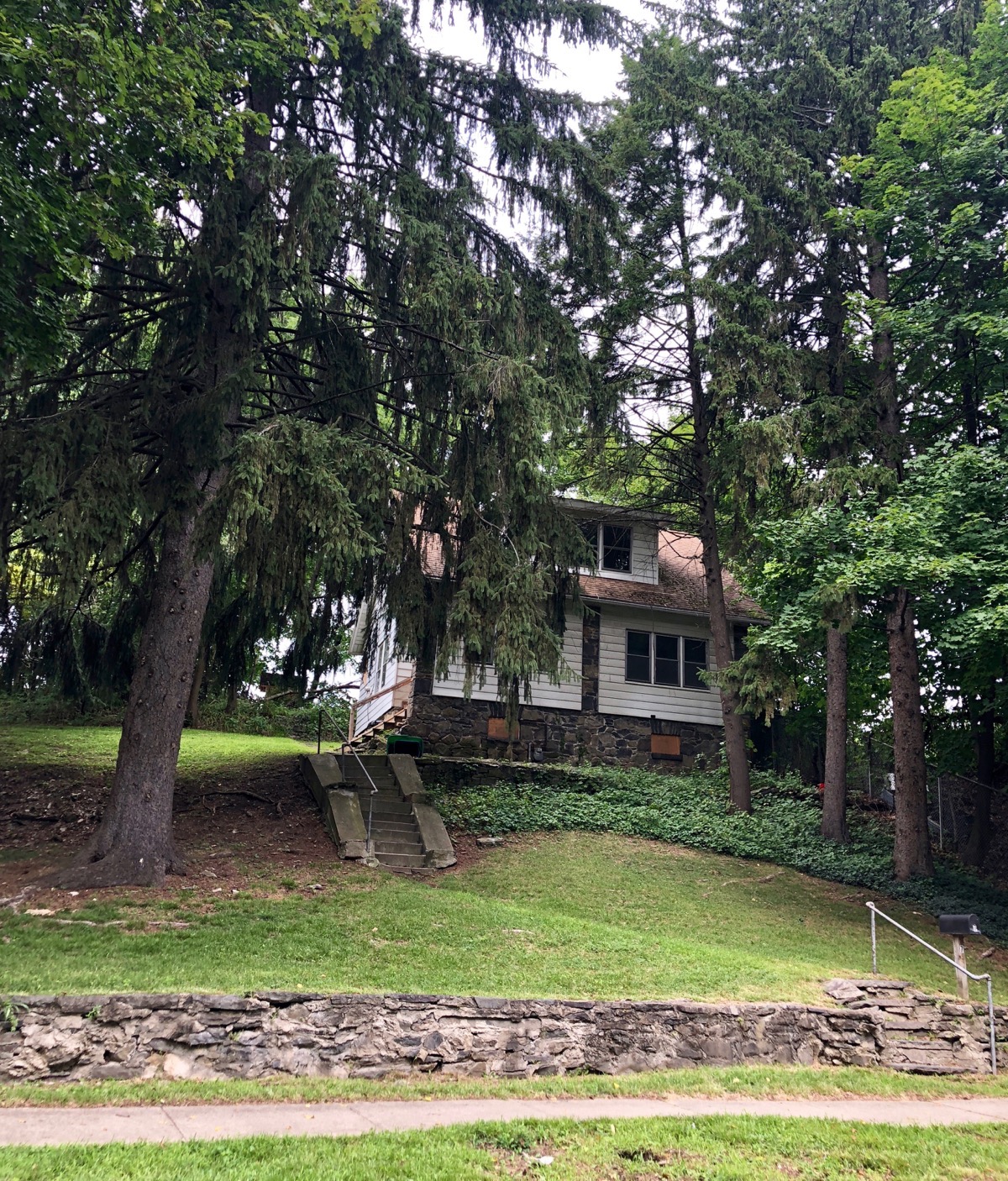 As we walked, darker scenes from Harry Potter movies kept popping into my head. This house could have been easily used to start the fourth movie when the old housekeeper wandered into the Voldemort’s meeting with Barty Junior and Wormtail. Here, a whistling tea kettle in an abandoned kitchen would fit right in. 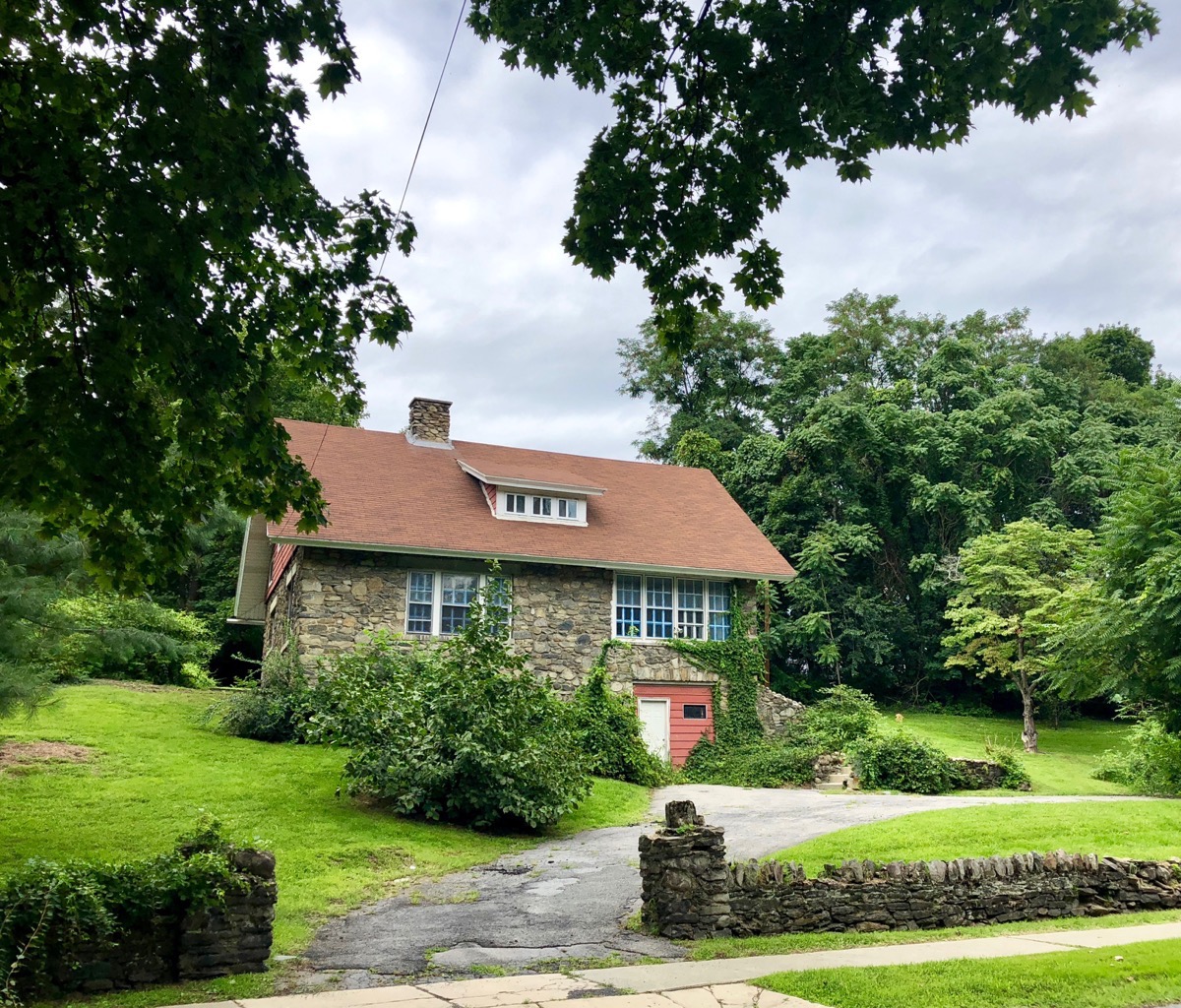 This one looked something like a place where Dumbledore could have come to persuade Slughorn to take over The Defense against the Dark Arts job. Maybe it’s all these greens that are so green this year because of the rain. Maybe it’s the stone hedge. 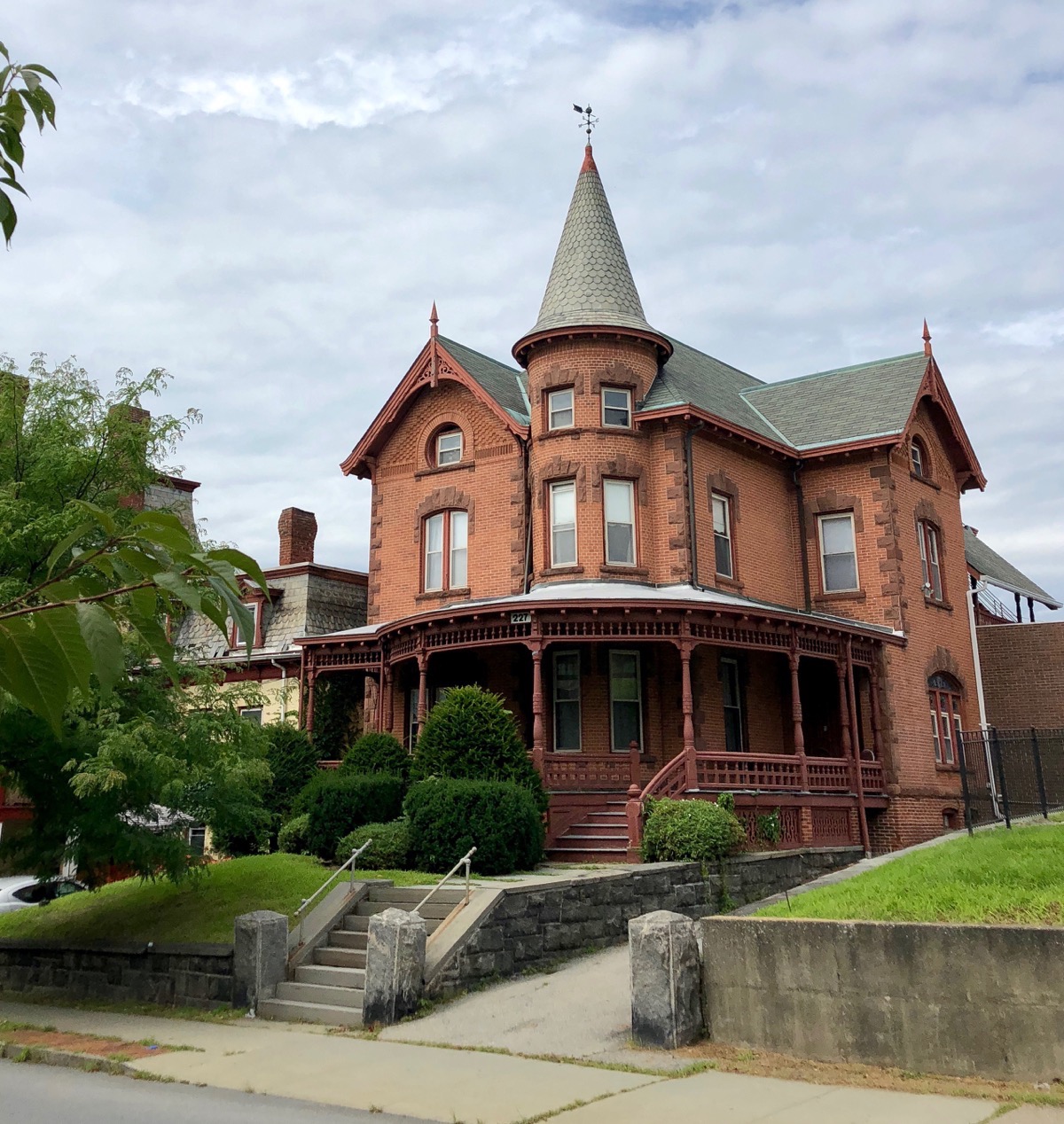 Poughkeepsie Italian Center — a beautiful building that somewhat resembles Mark Twain’s house in Hartford, CT. But if Mark Twain’s house stands alone in all its beauty and history, this building is closely surrounded with some bland modern attachments that make it look back-to-the-future and out of place. 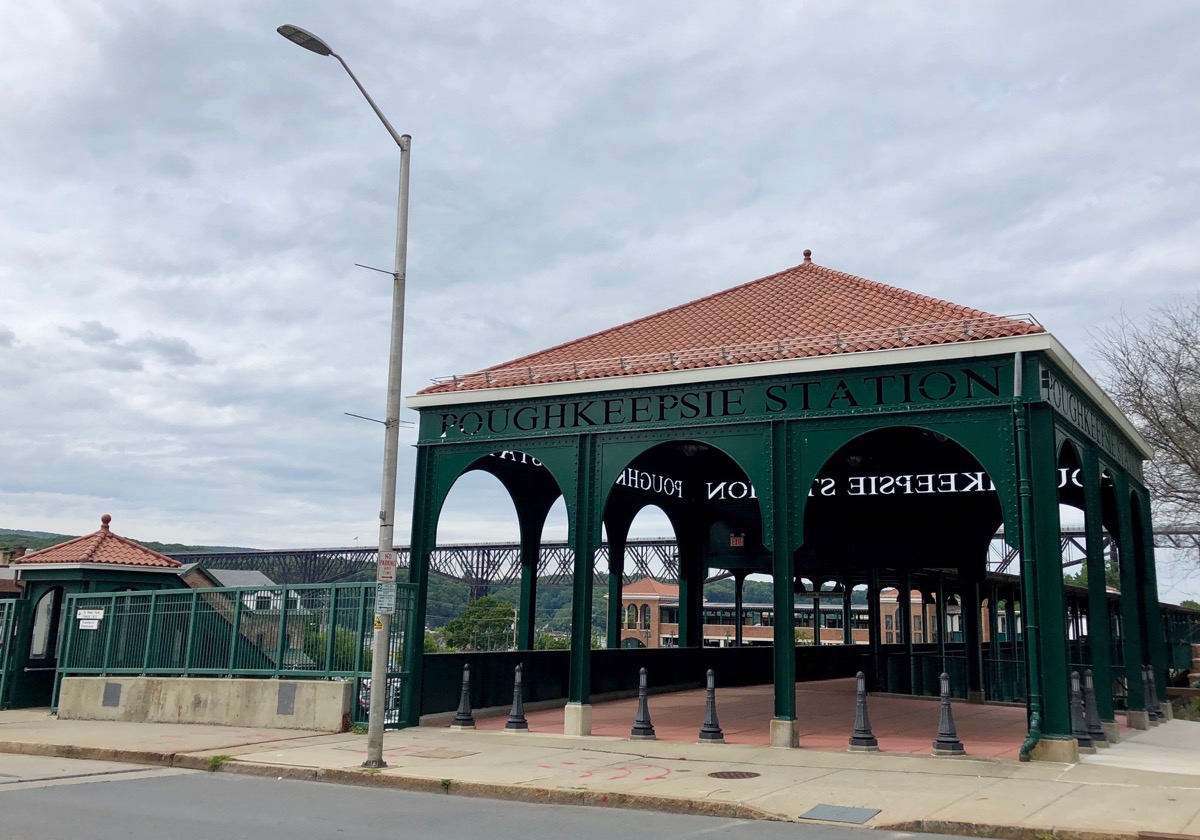 The train station. It was probably Sunday that made everything look so abandoned. The map kept promising “boutique shops, breweries, and restaurants,” “eclectic mix of businesses and residential uses.” 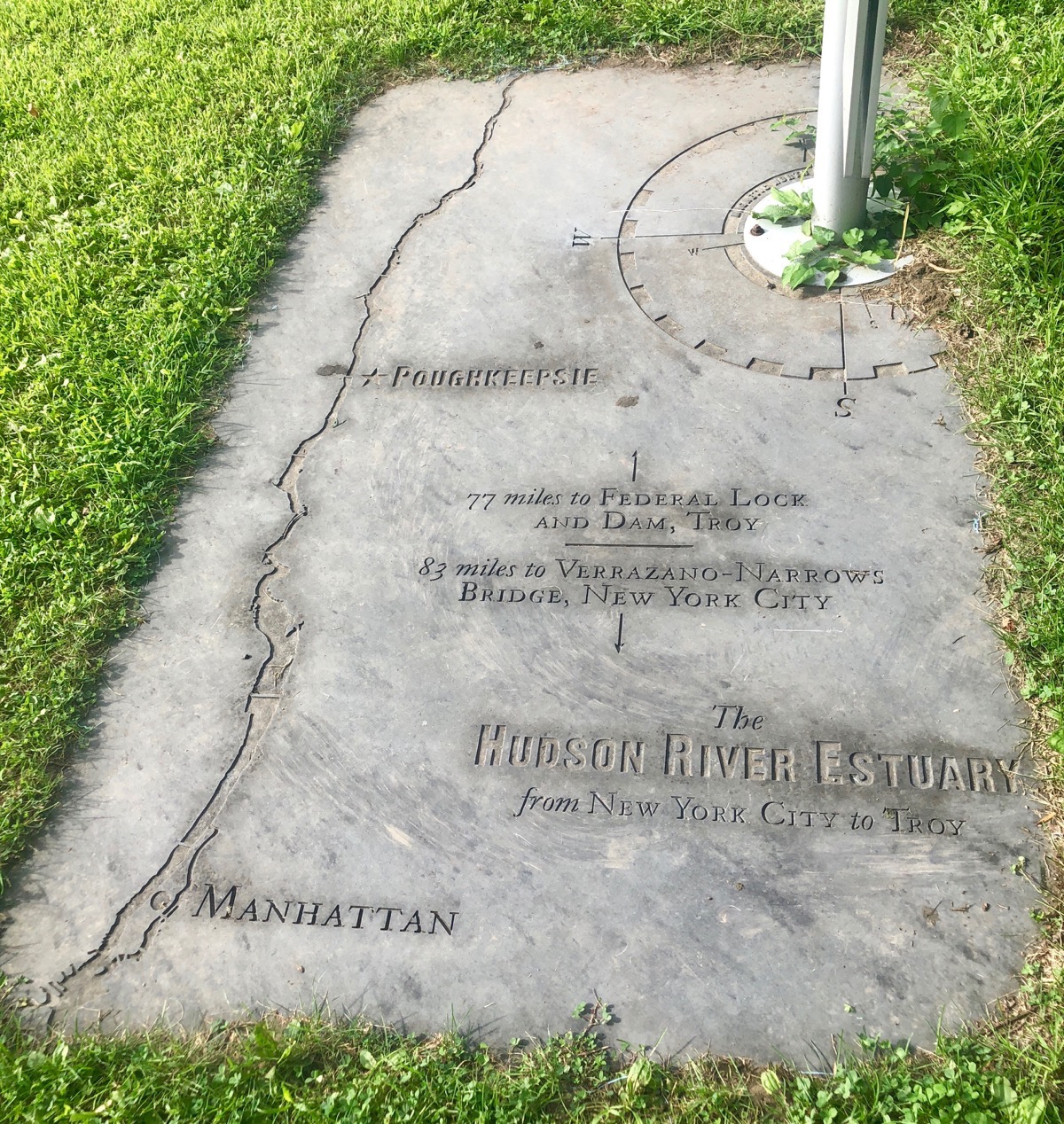 By no means, the town was a disappointment — it is always interesting to see places off beaten path, people who live there, what is actually real. It just seemed to be misrepresented. Anyway, the views, the weather, and the river made the day and the trip wonderful. We found this slate map near a restaurant on the waterfront where we had our lunch. Interesting perspective. 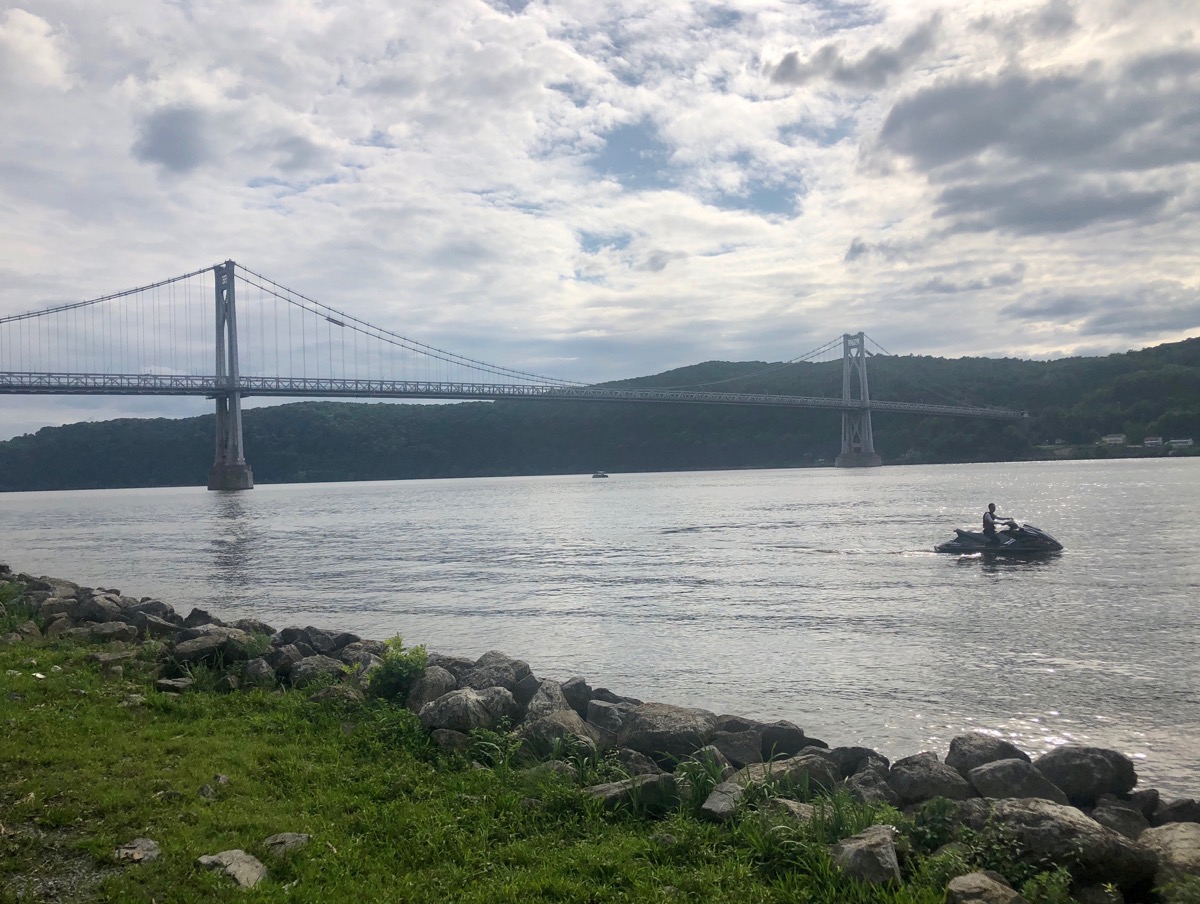 To return back to the car, we had an option to head back to the Walkway Bridge or to make a loop towards the Mid-Hudson Bridge, a suspension bridge that carries traffic across the river. Always up for something new and moving forward rather than going back, we headed this direction. Good thing we did. This turned out to be an experience to remember. 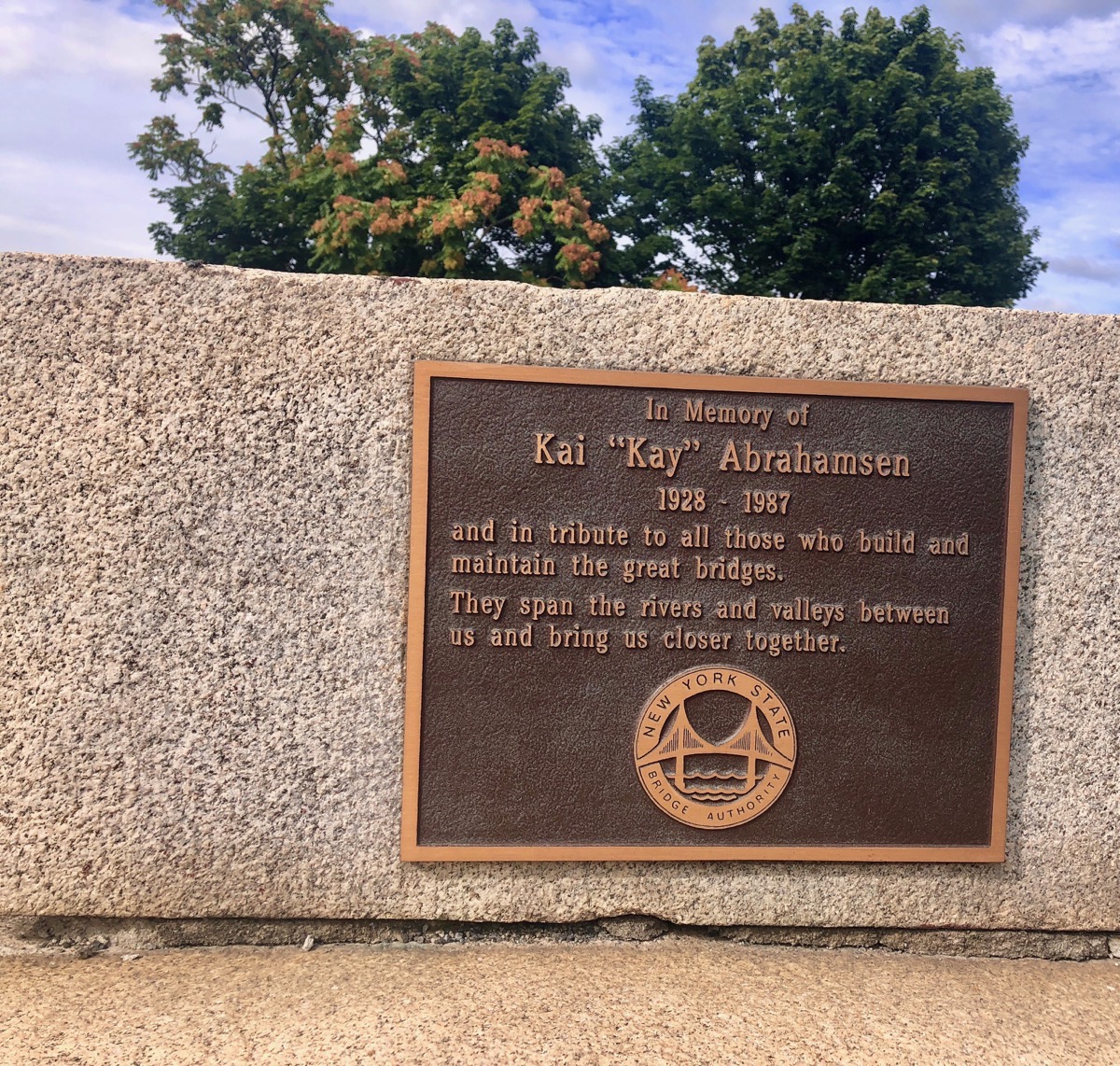 This plaque is at the very entrance of the bridge. Isn’t that the truth? 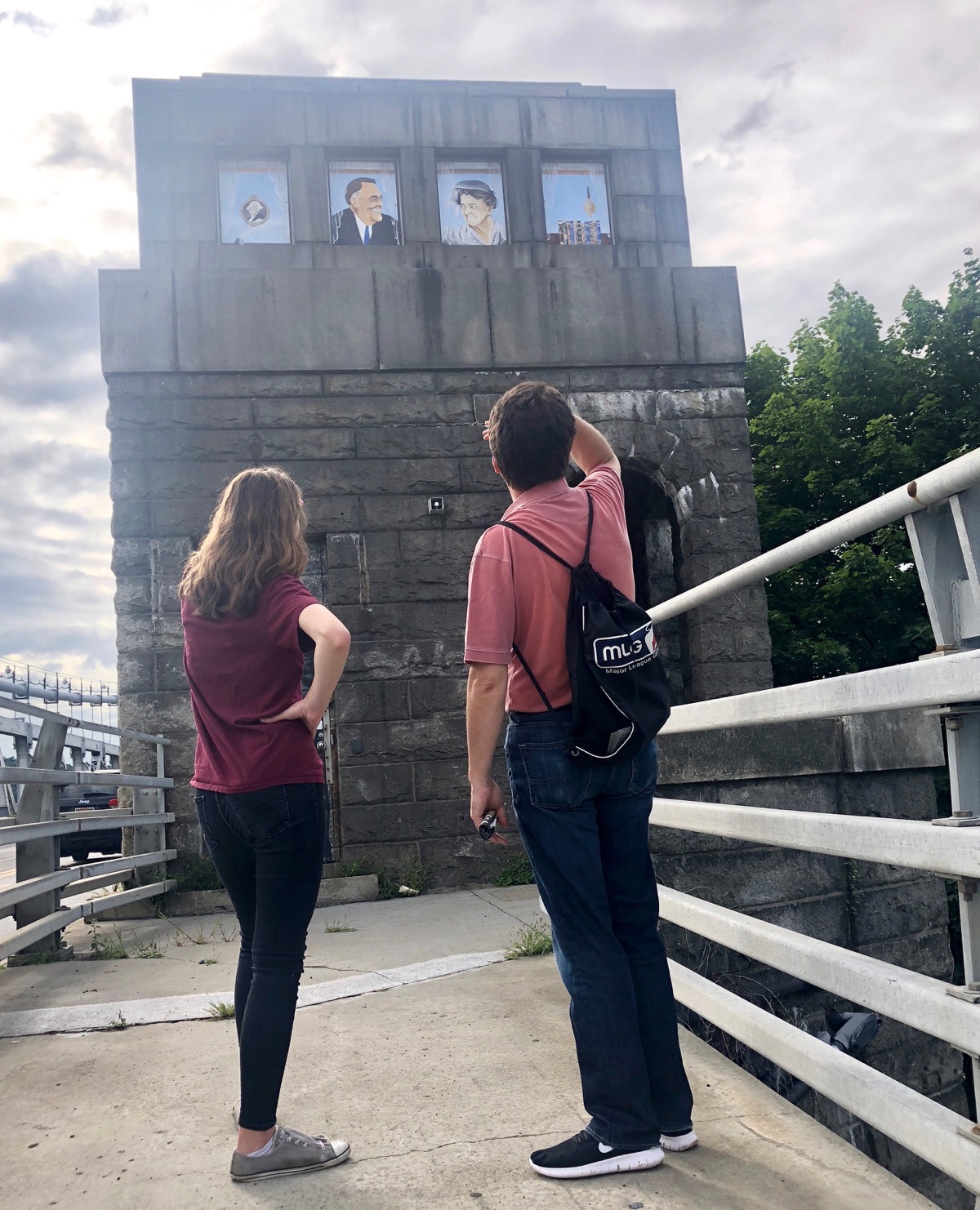 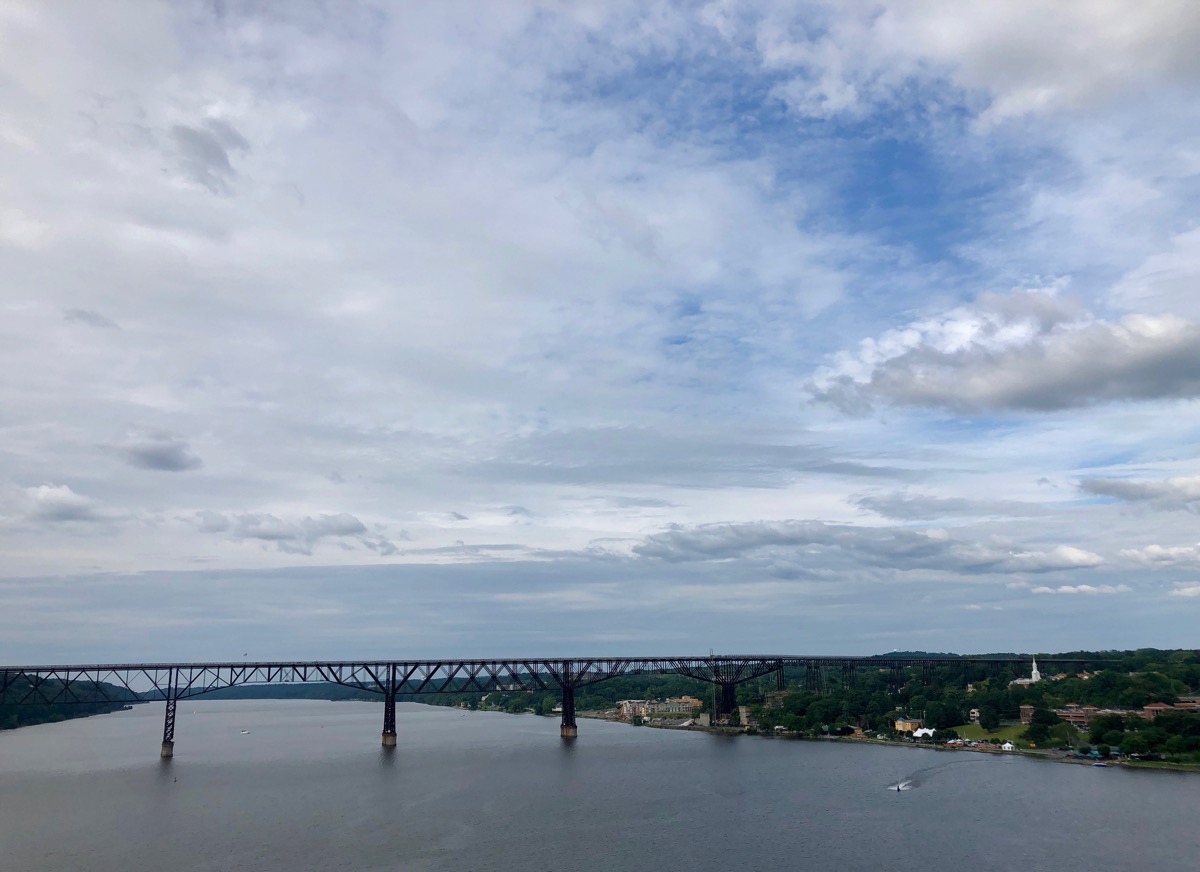 This is the Walkway Bridge, or Railroad Bridge, as seen from the Mid-Hudson Bridge. It appears more impressive and much longer than when you’re actually walking on it. Crossing this one off the list. 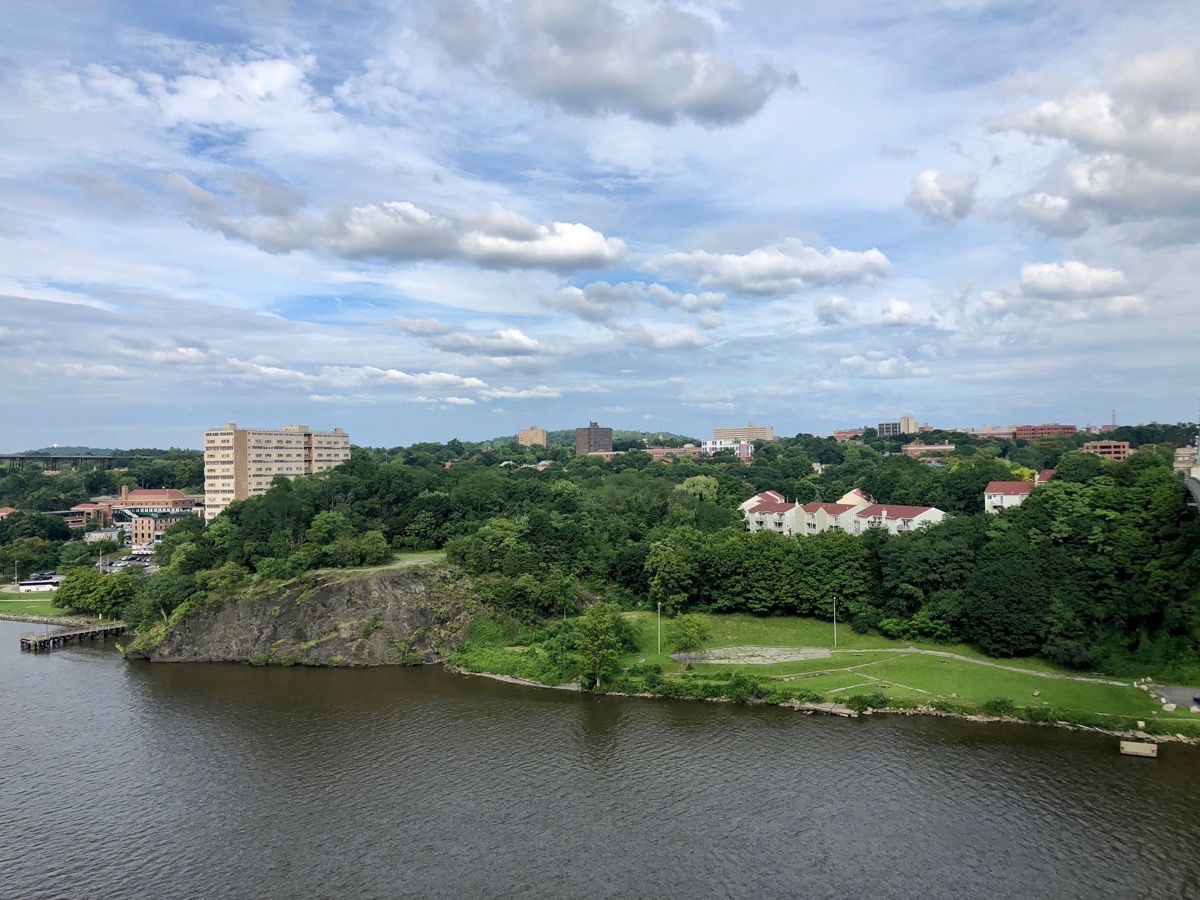 Poughkeepsie view from the Mid-Hudson Bridge. Modern construction doesn’t always go well with a historic ambience but who knows what they are going to say 100 years from now. And this sky… 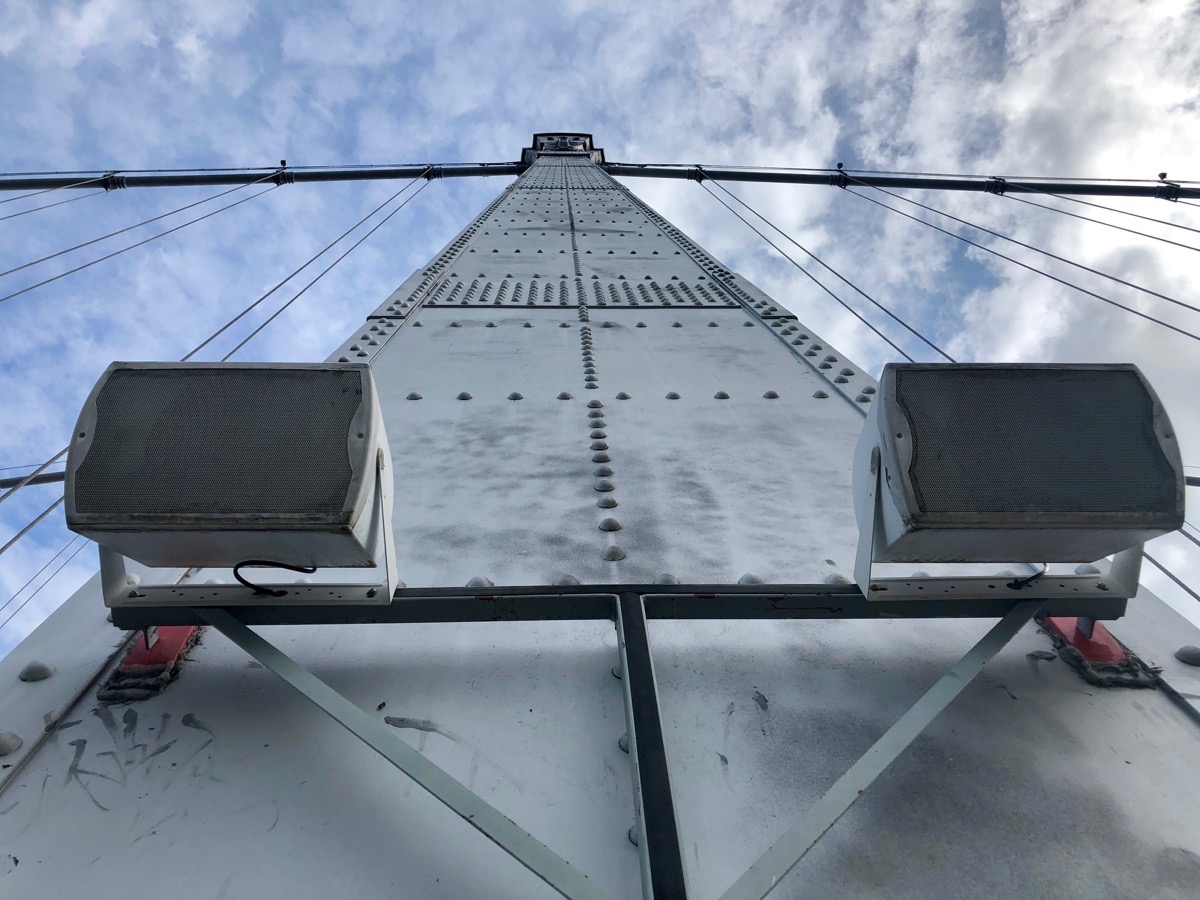 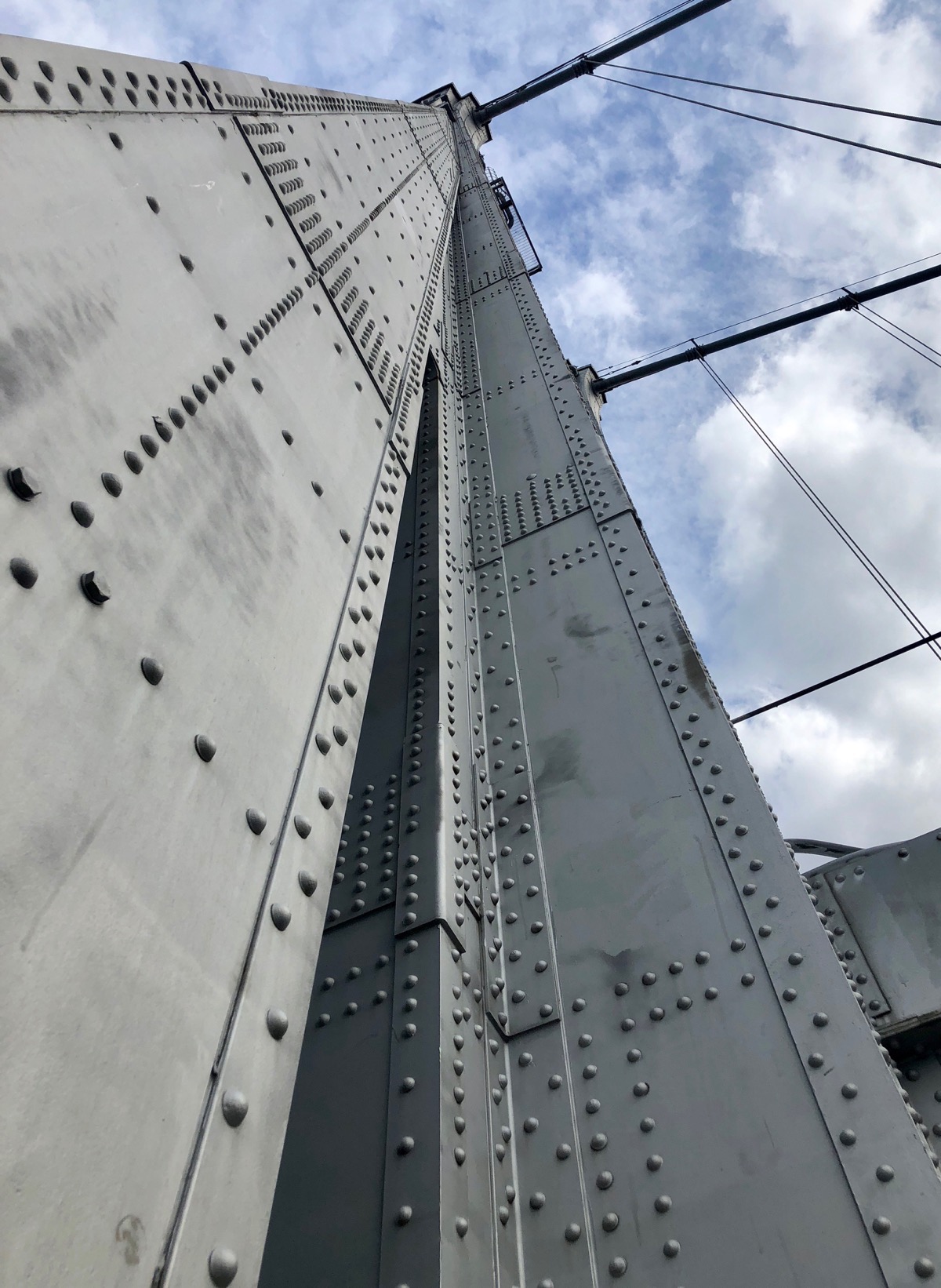 Back to the bridge. It does have a strong resemblance to the GWB but because everything is smaller and less guarded, the impression is more powerful. You can come close to the supporting pillars and when you look up the head is spinning. 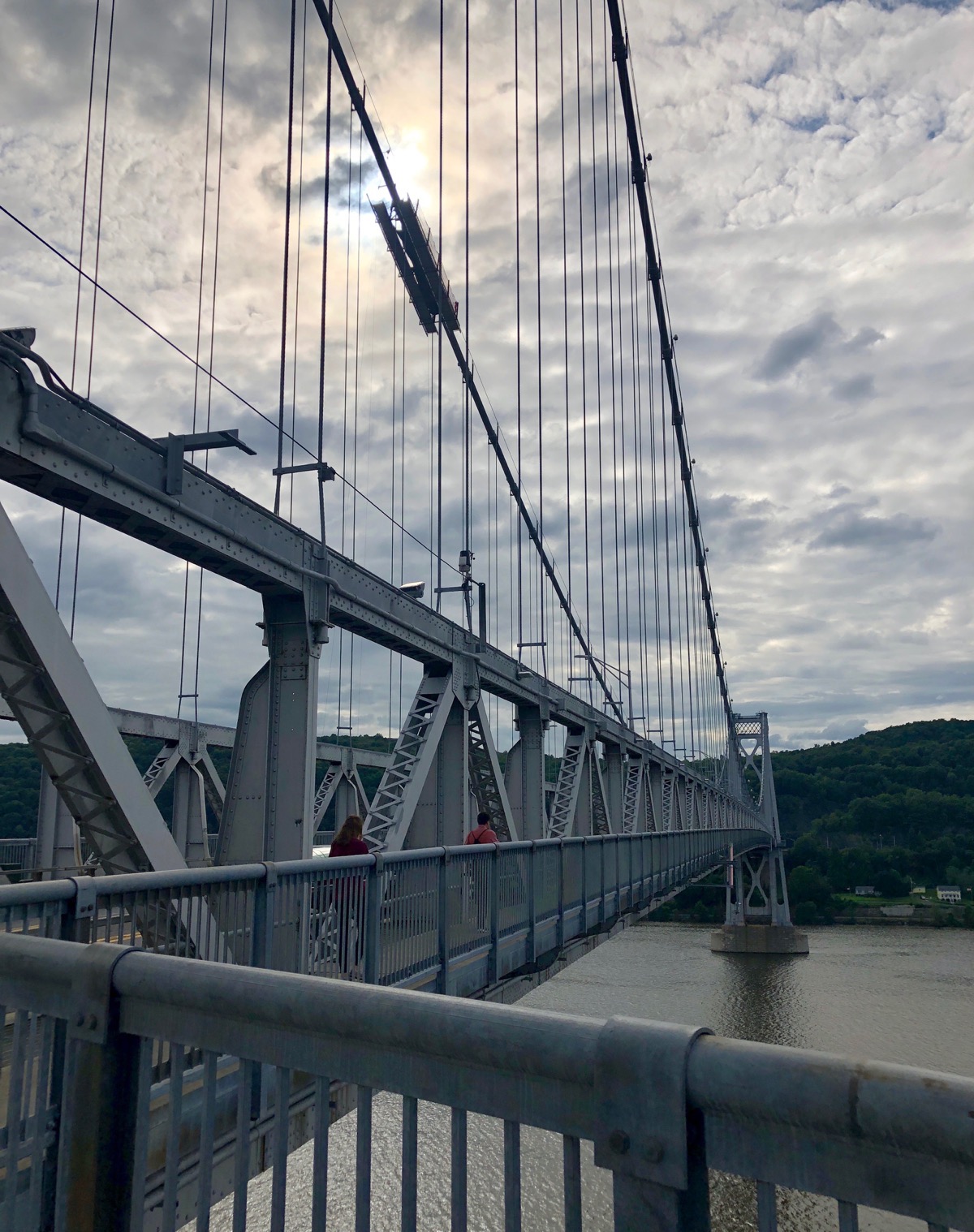 The water here is closer, the walkway is more narrow. Unlike the crowded bland Walkway Bridge or guarded rushed GWB, this one is empty, open, slow. And here you are — all alone, exposed to nature and grandeur of human thought and effort combined. 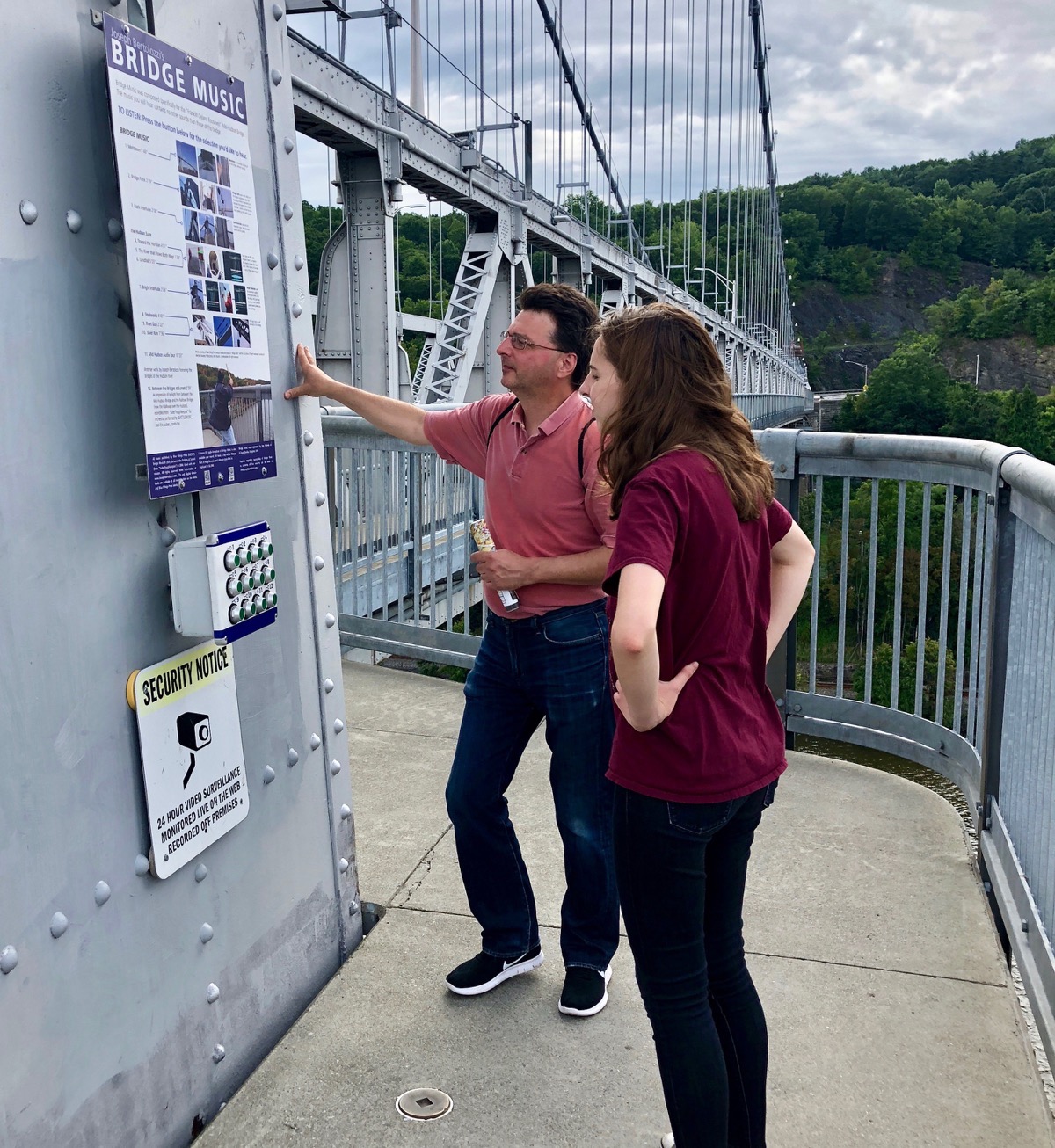 Here’s something different — Bridge Music. This happens when a composer decides to play the bridge like a musical instrument. Over a period of time, an organist and a composer Joseph Bertolozzi, harvested sounds produced by the bridge and its structures: cables, spindles, rails, flanges of beams, metal plates and grates. He put the concoction of clanks and squeaks through a computer program that produced corresponding pitches and rhythms that Bertolozzi combined into melodies. Now you can stop here and push the button to hear the tunes of the bridge. 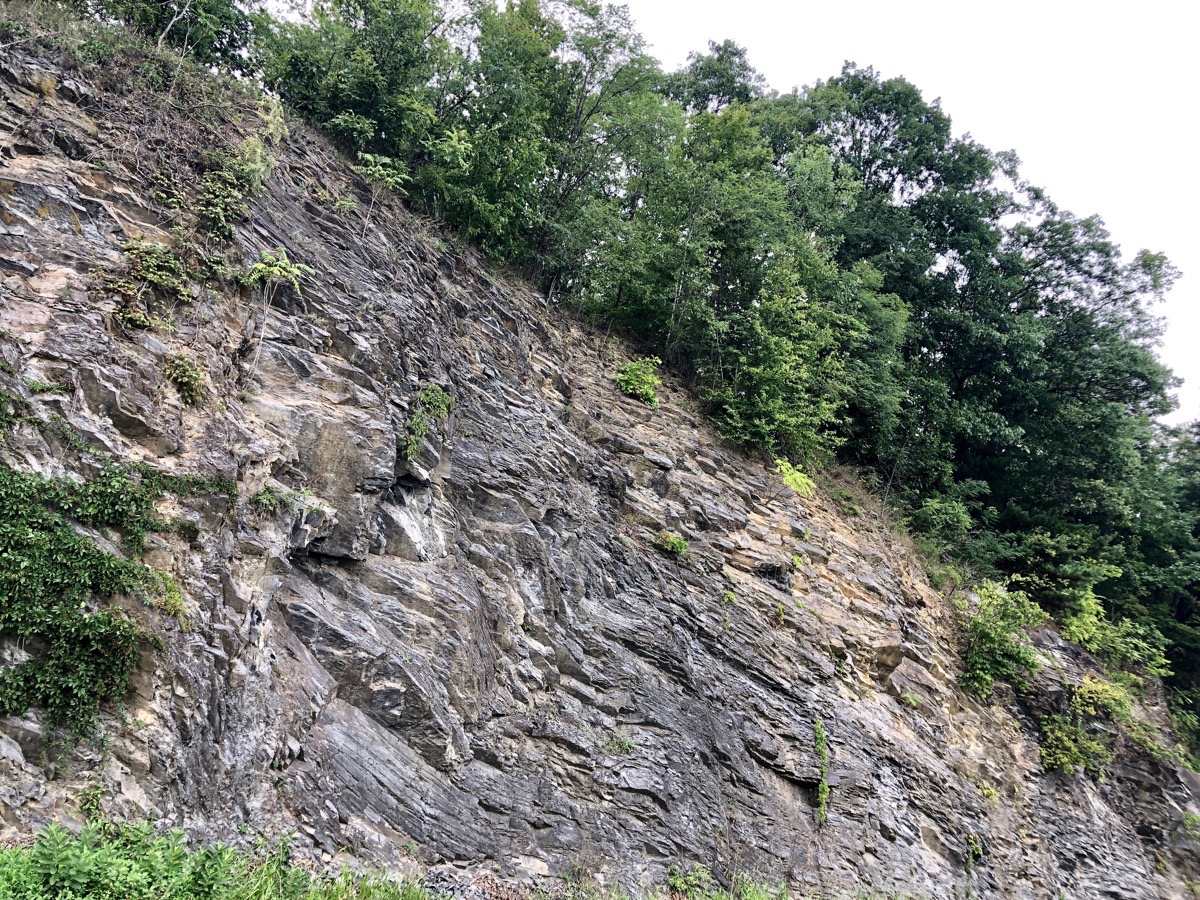 These are the rocks of Dutchess County. Driving along Palisades in Nyack, I always wanted to touch these rocks from so long ago, holding so much time, but I was always in a car, always on a highway. Finally, I did.  Maybe it was not such a bad thing it was raining at the Jersey Shore today.

A Man on a Train
Kayak for Empty Nesters