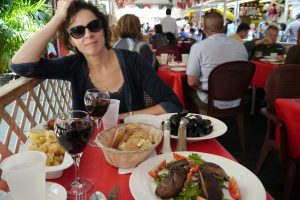 A FEW THINGS ABOUT JULIA:

— Born and raised in Moscow, Russia, way before it was hip and hopping, I now live in the Jersey suburbs of New York.

— A single mother of a five-year-old, I moved alone across the pond with $40 in my pocket, leaving behind supportive parents in high power positions, best possible education, prestigious job, desirable property in the center of town, and great friends. To start over.

— When I was little, my mother would pay me one rouble, a lunch value back in the day, if in the morning I’d raise my arms in a stretch attempt which would be considered an equivalent to exercise. Now, I own a barre studio.

— My first barre class I took on a $20 bet when my friend Johanna tried to stop me from making fun of her strange moves in a strange room. She also bought me a pair of pants to take this class. They are in my drawer now and, 18 years later, they still fit.

— In grade school, I failed multiple writing assignments as I was using pre-revolutionary alphabet. Three grandmothers in charge of my upbringing — St. Catherine’s school graduates — had only XIX-century published books in their libraries to teach me reading and writing. That grammar did not sit well with the current curriculum. I do not remember those failures of my early childhood besides the embarrassing stories of my old classmates.

— In my previous life, I was a reporter and a medical writer/editor with MA in journalism from Moscow State University and MA in science writing from New York University.

— For eight years of my new life, with English as my second language, I taught writing in American college to native English speakers.

— An aging Russian/Soviet woman in The New World, I pulled off raising three American teenagers, fixing an old house, and starting a new business — simultaneously. I’ve never employed a babysitter or a house help. I can paint and strip paint. I spackle and solder. I know how to install a new toilet and can clean the old one. Time proved I can hold a conversation with a Hollywood star, a CIA director, and a Nobel Prize scientist.

— Love urban walks! The most memorable one was from Bethesda, MD, to Arlington, VA, along the entire length of Massachusetts Avenue, across the Key Bridge over Potomac. Two favorite ones in New York were from Columbia Wien Stadium to Battery City Park and from NYU Alumni Hall on the corner of 3rd Ave and 9th Street to Coney Island and back. Recently, Tom and I walked from Fort Lee, NJ, to Dumbo in Brooklyn. My friend Greg once told me: “Julia, whatever you do, don’t start walking.” Sorry, Greg…

— For 26-something years, a nice Italian Catholic boy from New Jersey whose life I’ve messed up has been putting up with me. Against all my efforts, he helped me find myself and become what I am now.