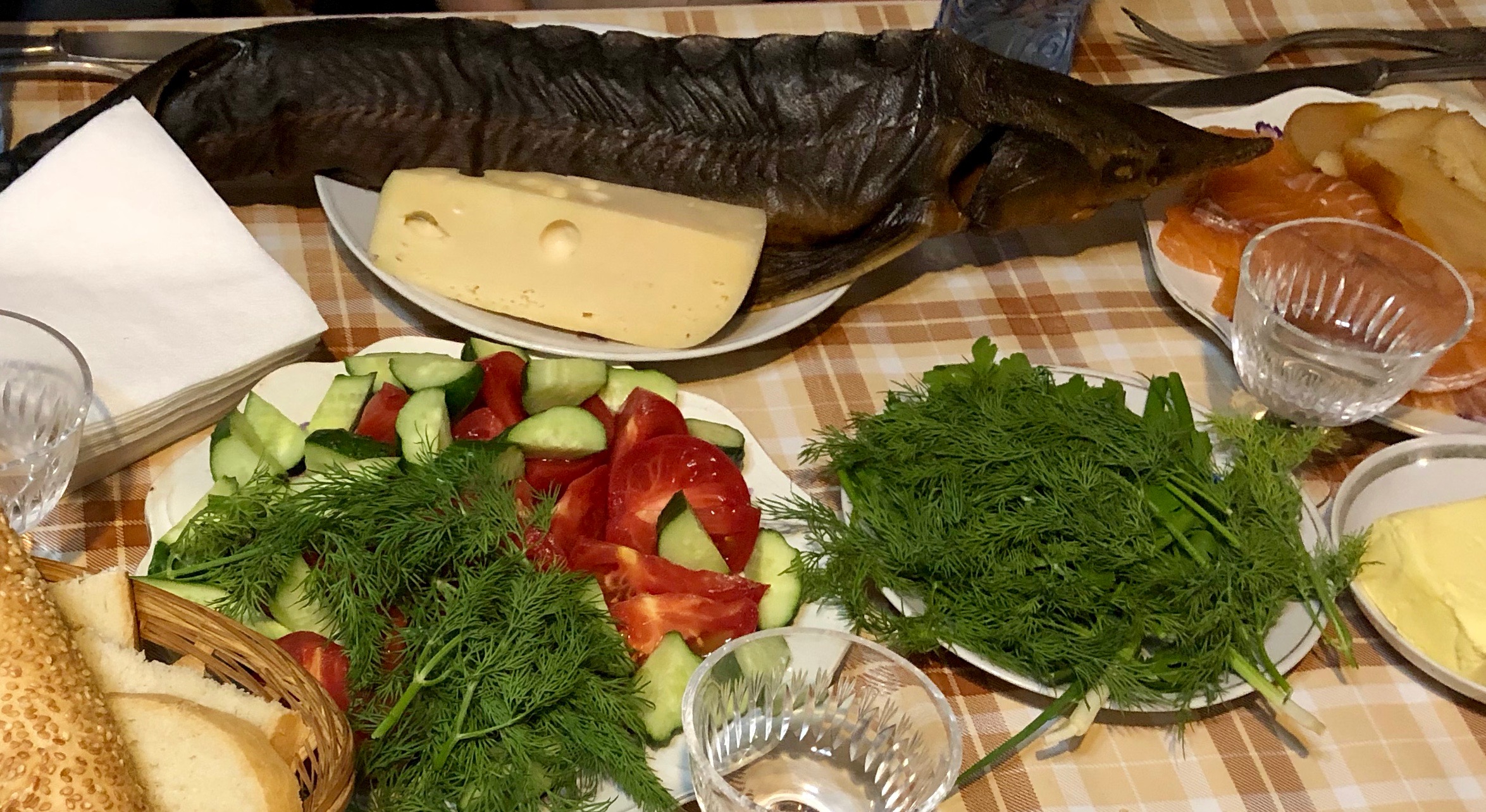 We did get a few sympathetic words from friends about night flight hardships but it was our firm plan to fly a red eye. Direct. JFK to Moscow. Nine hours and some. Our plane was scheduled to take off after midnight NY time and land in Moscow early evening. The thought was: we’d be tired enough from the day to sleep on the plane at least for a few minutes but this poor quality rest would leave us tired to easily turn off for the night in Moscow. By the time we’d get to my Moscow apartment, there should only be enough strength to unpack, have a snack, quick hello with my dad, and collapse. 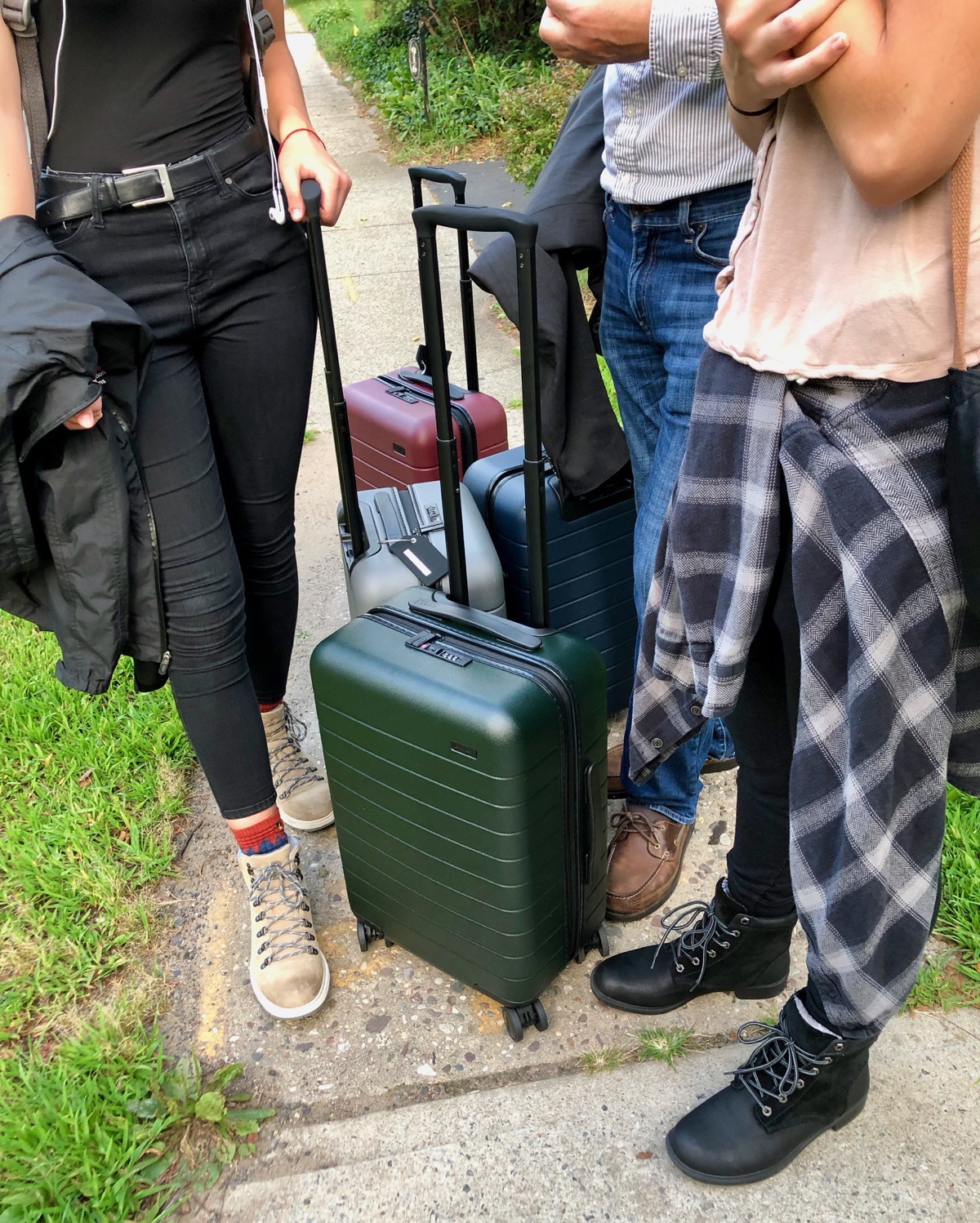 With no luggage to check in, we started our trip around the world at our local bus stop. Thanks to the advice of my friend Jill and support of my mother-in-law Barbara, we all were stylishly outfitted with Away carry ons. 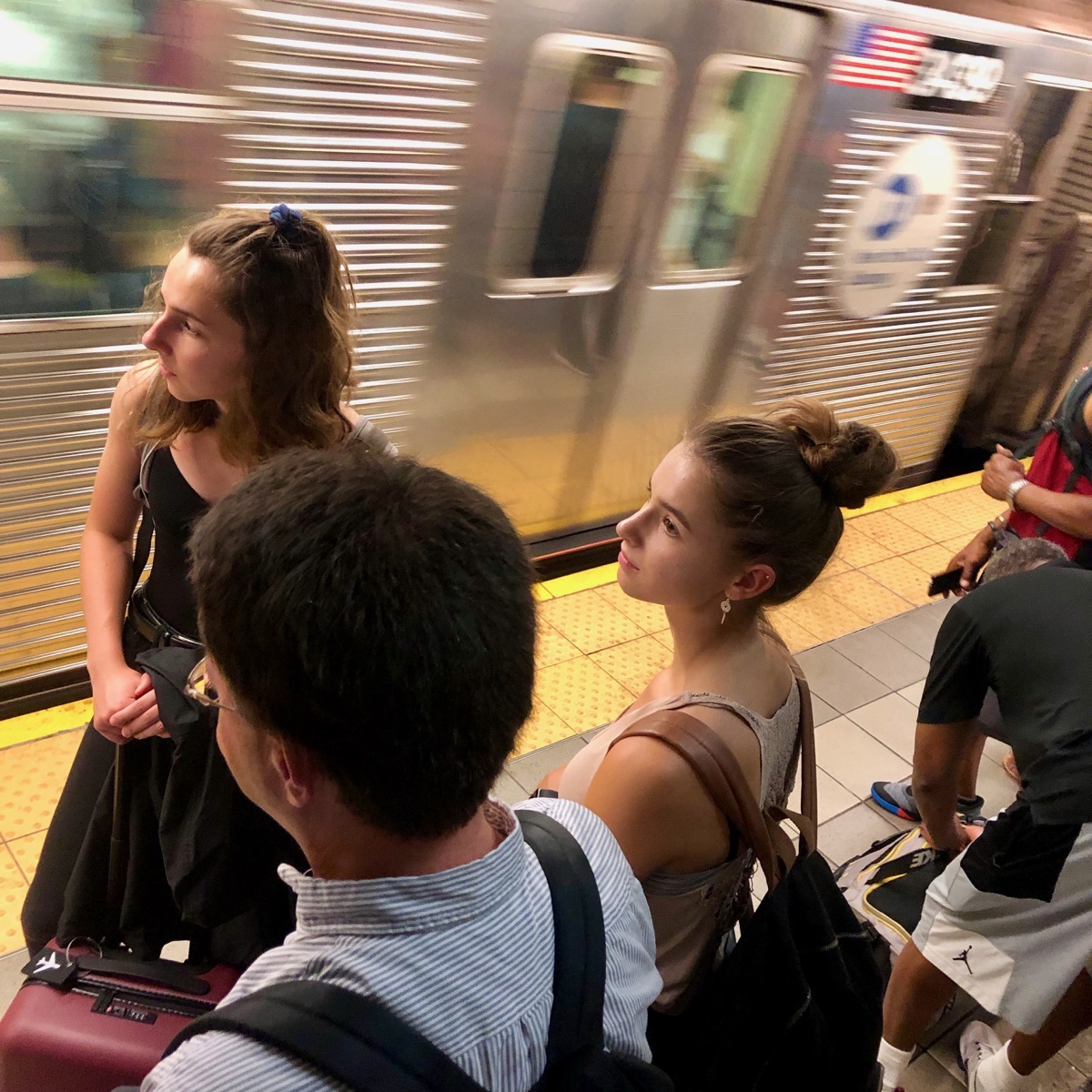 NJ Transit passed us on to NYC subway E train to Jamaica. 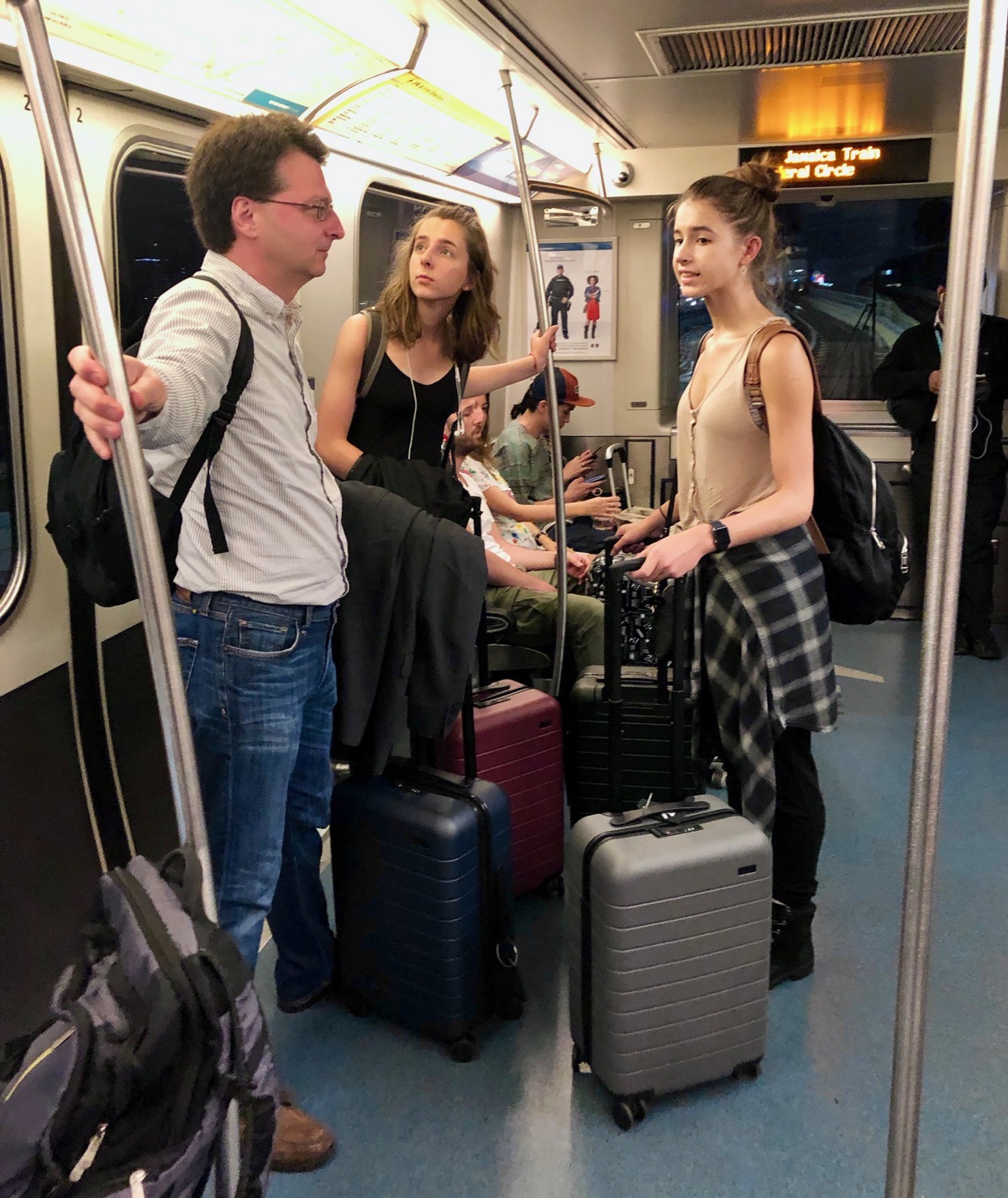 In its turn, NYC transit took us to the Airtrain to JFK. One might roll one’s eyes at public transportation, but it was like commuting to work and ending up on the other side of the globe. 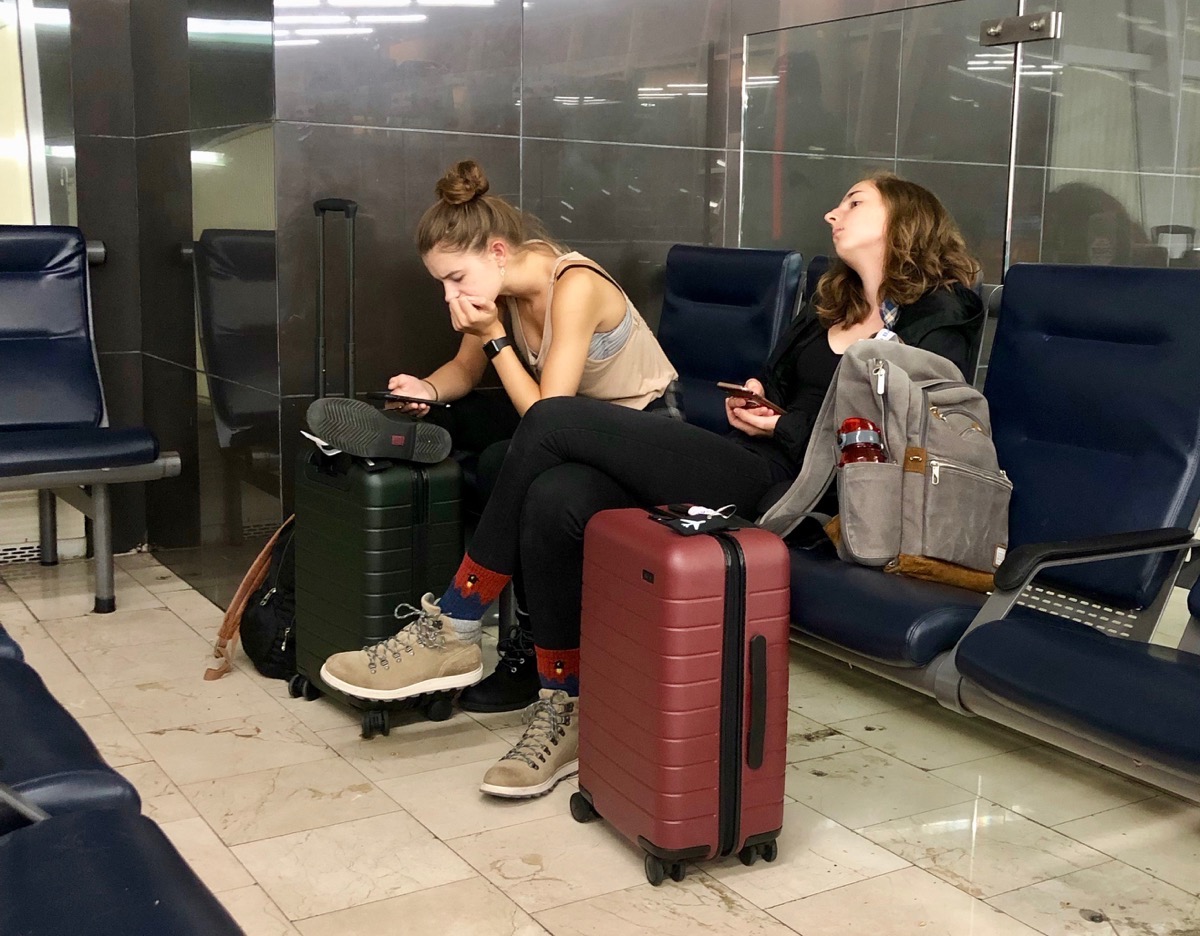 We did encounter an hour delay. Amazing how technology helps one overcome minor hardships.

Our redeye plan worked — for the most part. The part after landing. During the flight, there were moments I wanted to open the door and get out. First, I couldn’t sleep at all — I might have fallen into unconsciousness for a few minutes once or twice. My mind was so worked up, I could neither focus on books nor movies. “White Crow” about Rudolf Nureyev defecting to France did hold my attention as there was some relevance. Neither “Vice” nor “Widows” worked. The legroom was unusually tight. Besides, Tom, with his ability to sleep suspended upside down with an orchestra playing along, took some unusual diagonal position in his chair ending up with his back on my arm. I tried to keep still not to disturb him. You might have to suffer one way or another — either on the plane or after. It’s better to suffer on the plane.We landed. Hit the bathrooms at the airport and moved towards passport control.— Get your passports ready, — said Tom.We reached into our bags and suddenly Charlotte dropped everything and ran back towards the plane without saying a word. Our only thought was she could not find her passport and ran back to look on the plane.— Mom, don’t you want to help her. She doesn’t speak Russian, — pointed out Lizzie to my parental inadequacy.I followed. The plane was still there. Weird feeling knocking on the door that a few moments ago has been awash in air currents at forbidden altitudes. They opened the door, but didn’t let me in. Flight attendants searched the plane — no passport. And no Charlotte. Heading back. Oops. The door out of the jetway is locked. Pushing buttons — none work. Back to the plane. Other end of the jetway is locked. No buttons to push. Back and forth — no way to get out. At least in The Terminal, Tom Hanks was locked in the airport with bathrooms and water at his disposal. I am locked in the jetway. After a few raging bull attempts at both sides, I settle on the floor by the glass door to out-of-the-jetway thinking what charges could possibly be pressed against me at this point. Suddenly, there was Tom’s figure appearing on the other side. His facial expression — we’re waiting for you, what’s going on. A few bull’s attempts from his side, and he realizes that the fault is not mine, he waves to hold on and vanishes. (In the back of my mind — was it his elaborate attempt to get rid of me? Finally. A good one — after all these years.) But Tom comes back — as he always does — with an English-speaking attendant who sets me free. We reunite. Hug.

Charlotte forgot her phone in the bathroom.

The rest of the border crossing was uneventful. Besides Tom and the girls diverted by Sheremetyevo personnel to register for the flight back to New York instead of crossing the border to Moscow. As a Russian citizen, I was in a separate line. Somehow, they made it out the right way.

Tanya and Sergey. It’s like when you fall into a cloud. They were there to pick us up — literally and figuratively. Right there and then, at the airport: we had our SIM cards installed — communication, Troika cards — all means of public transportation covered, Yandex cab rides — taken care with prepaid card. And flowers. I hugged Sergey — he was my classmate after all and the primary connection. But Sergey honestly pointed — it’s Tanya. How could I have been so dumb… Tanya 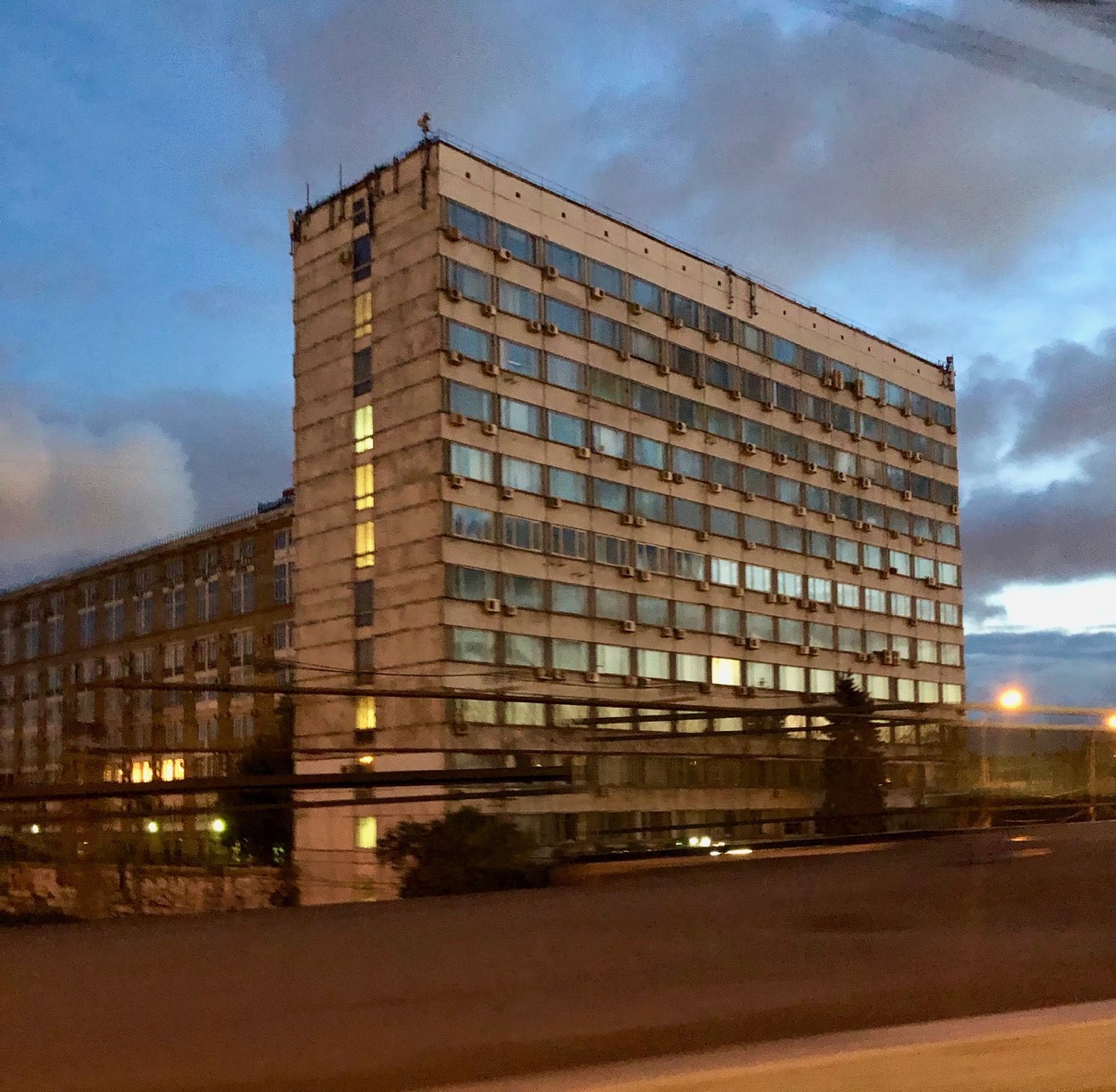 Our taxi ride took us right by the place where I spent the few first years of my writing career. The “PRAVDA” sign has been taken down from the top of the building but some windows were lit. The business goes on. 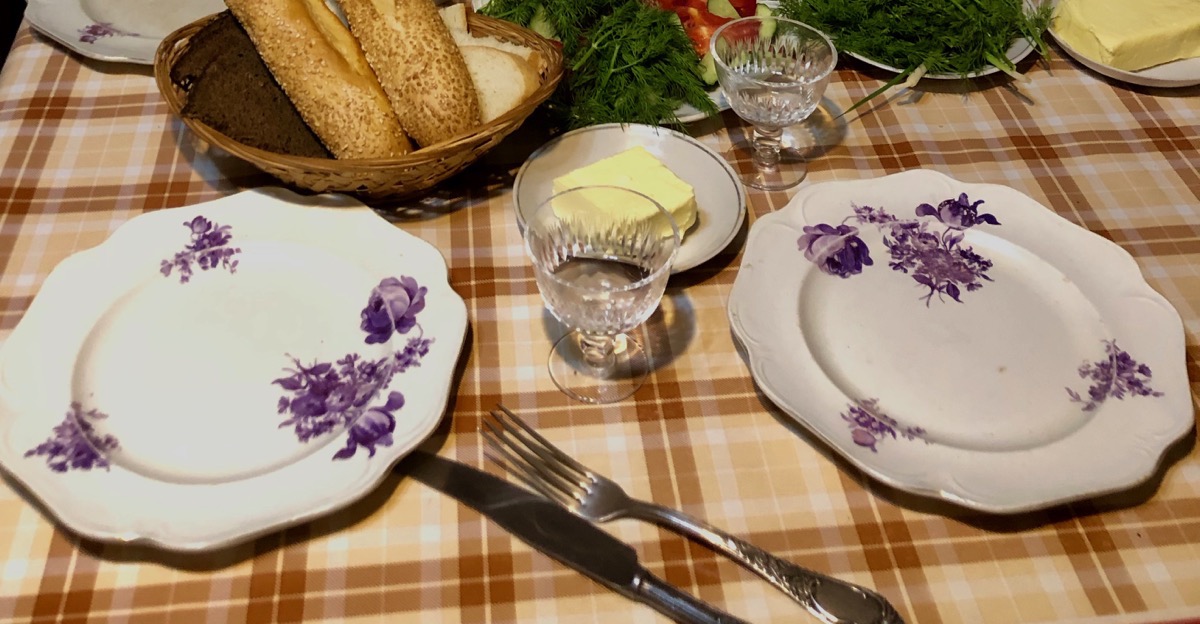 At home, my dad set the table with antique family china. He went all out with a variety of smoked fish to impress us. Unfortunately, it was just him and me who knew the meaning. Some things you just have to live through to understand.

That exquisite Caspian Beluga sturgeon, the one that provides the world with priceless black caviar, butchered in five pieces with a dull knife and devoured with hands brought one memory back. I was probably seven or eight years old. My brother was 15 or 16. One of my dad’s colleagues visiting from Caspian area brought, to impress my dad — yes, people could do that back then — live baby beluga sturgeons. He wanted to impress us with Khe, something you’d describe as ceviche today. In those days, when there was live fish for dinner, you’d fill the bathtub and let the fish swim until the woman of the house comes home from work to prepare it. That’s what we did — filled the tub, let the fish swim. Dad and his colleague went to work, I went about my own life. And then… my brother came home with his teenage buddies after a soccer game. They were hungry. They saw the fish in the tub, they heated oil in a pan, they fried the fish. That story has been told and rubbed in many times…

A Faithful Man
Trip to Russia. Day 1. Moscow. Off to the right and through Gorky Park.

1 thought on “Trip to Russia. Departure Day — Arrival Day. From Ridgewood to Moscow.”