A Taste from the Soviet Past: Salad Olivie

As long as I remember, my mother made this salad for every New Year celebration. Even during late 80’s and early 90’s, when there was nothing in the stores besides cans of seaweed. And she made it for my birthday, and for my brother’s birthday, and for my dad’s, and for her own. Five times a year. We only had it on special occasions because two most important ingredients — peas and mayonnaise — were not available on a daily basis. When my mother could get her hands on them, she would save them for special events.

Salad Olivie was a centerpiece of any Soviet holiday table. Every woman had her own version which mostly depended upon what was available to her at the time and, of course, that version was the only right one and the best one. As Olya Ryzhova of “The Office Romance” said to Yuri Samokhvalov: “I make this salad better than your wife. You should add a fresh apple to it.” With that, my version of this salad is the best one.

Although, I did tweak the list of ingredients quite a bit adding things from my new life and unheard of in the depth of Soviet winter: scallions, parsley, dill, fresh peas, fresh cucumbers, ham, chicken. Those were my childhood cravings which now I can have any day. Mom’s Soviet version did not have any of these, plus, peas were canned of that yellow tint and a version of bologna stood in place of ham and chicken.

Come December 31, I put a DVD with “Irony of Fate,” another major component of Soviet New Year festivities, in my kitchen’s TV player and set up for a day of chopping. Every year, I repeat this ritual although I know the movie by heart. Even my American husband understands it now without translation. In my American family, besides me no one is really excited about this salad because mayonnaise is not a big deal and we can get peas any day. As a matter of fact, they don’t really care for it as much as I do. That’s why I make this salad only once a year. It’s for me — to go back in time.

The movie plays and I chop along going down memory lane while tastes, smells, and sounds are bringing back faces and stories from the past. I do not miss the place but I miss the time and I miss people from that time. Some of them are gone for good and the country I came from does not exist anymore. Even if I can reach out and talk to some of these people, they’ve changed. So have I. So has the recipe.

2 chicken breasts skin on, bone in

Place unpeeled scrubbed potatoes, peeled carrots, and eggs in a large pot, cover with water, bring to a boil, and lower the heat. Eggs should be ready and taken out in about 10 minutes. Carrots should be ready a few minutes after that. Take them out as soon as they can be easily pierced with the knife. Potatoes might take another 10-15 minutes, depending on the size.

Place chicken breasts skin side up in a shallow baking dish. Cover. Roast at 425° F (220° C), basting occasionally with pan drippings, for about 35 to 45 minutes.

In a small pot, bring water to a boil and blanch ham for about 3 min to get the salt out. Take the ham out, add peas to the boiling water for 3-5 min, drain.

As they cool off, peel potatoes and eggs, peel and seed apple and cucumbers.

Chop herbs fine but do not incinerate them into a mush — you’d want to have some crunch to feel their flavor as you bite into them.

In a separate bowl, mix all the components of the salad dressing.

This is an enormous amount of salad for a large gathering. If your party is small, take as much salad as you think you’d need today and add as much dressing as you like. Save the rest in the refrigerator— vegetable mix and dressing in separate containers. It would be fine in the refrigerator for at least a week but I doubt it would last that long. 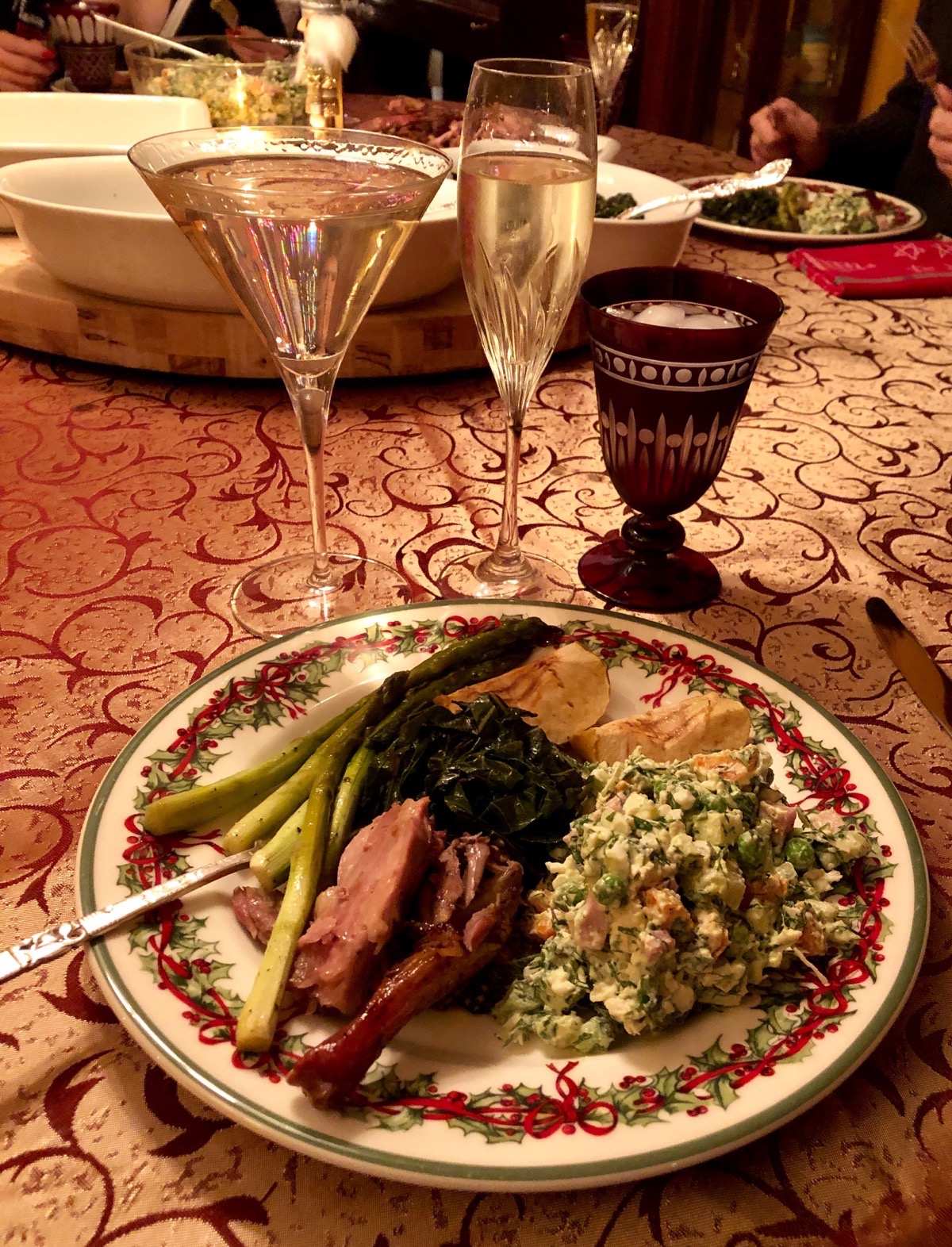 1 thought on “A Taste from the Soviet Past: Salad Olivie”