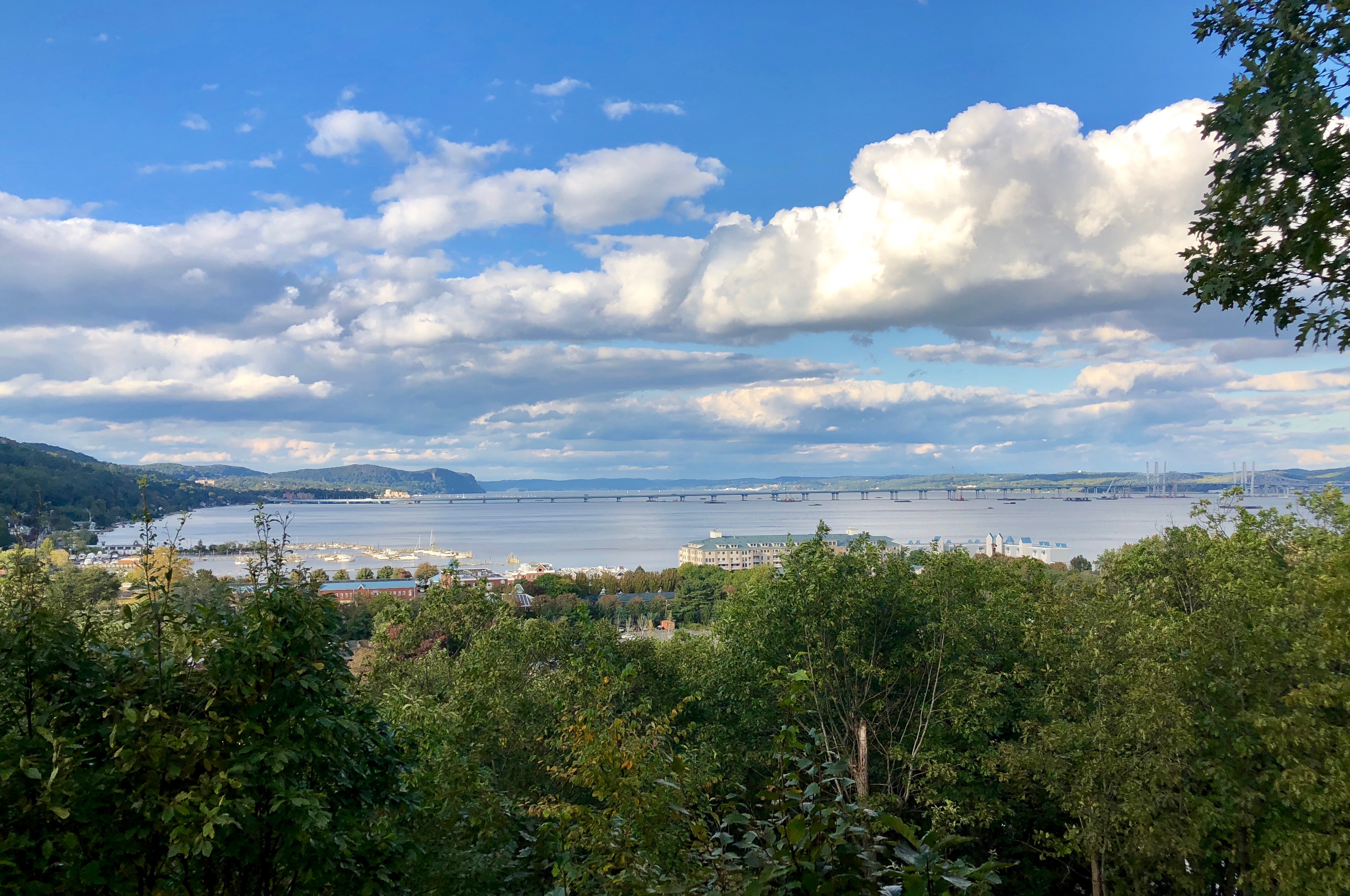 After a hike in the Tallman Mountain Park, it seemed like a good idea to try O Lar, a tiny hole-in-the-wall restaurant on the main drag in Piermont with the focus on Mediterranean food. Many recommended this place and reviews were promising.

It was Saturday night and no high hopes on getting in, especially when the first thing came at us was: “Did you make a reservation?” We did not. After brief deliberations with the staff, O Lar’s maitre d’, an impressive body builder with some seriously gelled up hair, gestured us to follow him in. It was amazing how a man of his proportions could navigate a place the size of my living room with tables inches apart. At first, I didn’t understand where he was taking us because people at the last table were sitting almost against the wall. No way there could be another table. Maybe there was some sort of a ledge for wanderers like us without reservations or some other space behind that wall. There was another table! Amazing! But how do we sit at it? It turned out there was a procedure. To let me to my seat, the servers had to move the chair and the table out, I had to inhale and get on my toes not to crush the food on the next table. People at that table had to lean away and raise their arms to protect their food from being swiped on the floor. Getting up to the bathroom from that seat was a whole other story. To let me out of my seat, a bunch of servers would rush in to move our chairs and table out, then move the furniture back in — to unblock the bathroom door. Once I was out of the bathroom, these series of steps have to be repeated in reverse. The procedure, although smooth, involved all diners at all tables adjacent to the one where nature called.

Anyway, we settled in with my elbow gently brushing the elbow of a woman from Berlin sitting next to me and bumping it every once in a while when I was directing food into my mouth. But our neighbors happened to have a great sense of humor and we made friends. You have to make friends when seated so close that your food is served to you sort of from under their faces. Well, we wanted to try. So there we were — trying.

We go out to eat not because we are hungry. Food is interesting: the science of it, the art. Of course the quality is important and presentation matters. The ambiance of the place, the mood do count, too. We go for an experience.

The food presentation at O Lar was impressive but not like a breeze — more like an effort. We started with ceviche which arrived in a modest glass bowl settled in a bucket twice the size of the bowl filled with ice. Since we’ve discovered downtown Paterson’s Peruvian citadel, ceviche has become my go to thing. And it seems Paterson ruined this dish for me. Ample amount of freshest fish without any distractions other than acidic lime juice and a piece of starch to make sure this juice doesn’t go into waste — that’s Paterson. At O Lar, ceviche looked so pretty with mango-avocado-red pepper coloring but only a few bites of fish on a tougher side and nothing to pick up the juice with besides a serving spoon. Sending this juice back is like ordering a soup, forking out the solids, and sending the broth away. Of course I used the serving spoon.

Our next pick was supposed to be grilled octopus — I can never go around it when it’s on a menu. But our German neighbors beat us to it. Once we saw what arrived to their table, we decided not to bother. When it comes to grilled octopus, we were definitely spoiled rotten eating out in Astoria. It’s the same like I can’t eat lobster anywhere after eating it on the ocean piers in Maine — they taste different. On O Lar’s platter, there were four or five white slices and you could feel the effort of the knife when our neighbors dug into it. We opted for grilled lamb. Although accompanied by a stylishly smoldering branch of rosemary, the lamb was plain overdone. Like Outback Steakhouse overdone. And tzatsiki that came with it was watery — not creamy, not acidic, not spicy. Bland.

The last try was an order of mussels from the list of specials which description ended with the word Incredible!  The mussels were gigantic and the sauce was great. However, chickpeas — and I love chickpeas! — turned it into a heavy meal and took mussels away, disguising them and somehow making everything heavy. And again, nothing to soap up the juice with. But with mussels I have a way — my shell is my spoon. And those shells were huge!

To be fair, we also ordered Spanish fries: if I get to have my ceviche fix, Tom has to get his fries. O Lar’s fries turned out to be potato chips, but were excellent and not salty at all. At most of the other places where we ordered fries, they were usually very salty.

The service at O Lar, I’d say was mildly aggressive with that we’re-cooler-than-you vibe. It was not exactly that you had to hold on to your dish as the waiter was pulling it off the table. But the moment the last bite was gone, the dish was whisked from under your nose and the table was being wiped. It felt like someone was standing hidden watching us eat.

The check arrived. Oops! Cash only. Never mind tax was written into the bill. Whatever. Tom made a trip to a cash machine a few blocks away. The moment that cash hit the table — we were still finishing our drinks — the waiter swept it off the table with what it seemed like a wiping cloth to speed things up and the maitre d’ posted two customers right next to our table indicating: you stuffed yourselves and are still sitting around when these folks are hungry and standing. Some mild brawl was stirring up by the entrance as it seemed like the seating procedure was not completely fair and people on line were getting upset.

After some serious acrobatics around the bathroom, we called it a night.

2 thoughts on “O Lar — A Tight Spot in Piermont”